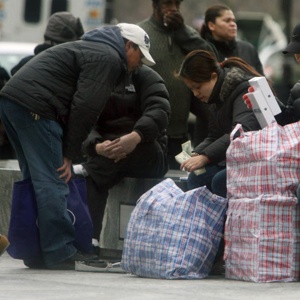 An Asian group of grey market iPad resellers is wiping out inventory of iPad 2 stock at a New York Apple retail store, preventing ordinary consumers from having the chance to get their hands on the coveted second-generation tablet.

The highly orchestrated operation is managed by a leader who pays out money to his team of 200 members waiting in line. Those members would buy out all inventory of iPad 2s at the Apple store and would turn around and re-sell the tablets at higher prices in the States and in China where the tablets have not yet launched.

Apple employees in the store said there wasn’t much that they can do about it.