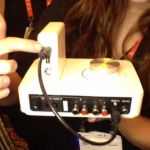 Griffin reps teased the Griffin 20 Airport Express amplifier at the CES Unveiled 2012 preview event. The device allows users to stream music via Airplay wirelessly with their existing speakers. Griffin isn’t proving any pricing or availability details quite yet and will not show the Griffin 20 at its booth on the CES floor.

The Griffin 20 will work with any current Mac or iOS device.

While the Griffin 20 is a novel idea, most average users would be better suited buying a decent Airplay enabled speaker if they don’t already have a spare Airport Express.