Many of us are kids at heart. That’s why the Griffin MOTO TC Rally remote control car will draw in kids and big kids like me. The car uses an app on an iPhone, iPad, iPod Touch or Android phone to steer this “kids” toy. It’s loads of fun to drive and will appeal to smartphone users.

The MOTO TC Rally ($99.99) is fun and easy to drive. The body comes with an impact resistant plastic that won’t easily break, even if a kid can’t figure out how to keep the car on the track or intentionally starts smashing the toy into the couch or another MOTO TC Rally, something Griffin encourages. More on that later.

Thanks to large tires the car gets good traction and runs over bumps and junk on the ground. A pair of headlights give it a fun and realistic feel. 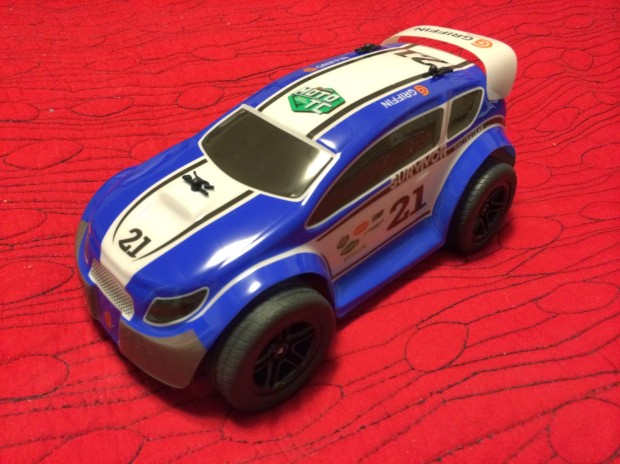 The car charges via an included USB cable, although they don’t include a USB to AC adapter in the box. It also comes with a finish line in the form of a piece of rubber with magnetic material that the user can place on the ground and use to track laps in the app. The app also offers other cool features one wouldn’t get with a traditional RC car like …

Setting up the card doesn’t take that much effort. Charge up the car with the included cable plugged into a USB AC adapter or a computer. Install the right app. Griffin offers a few RC car apps and only one works with the car. Here’s the iPhone version available free on iTunes App Store. Get the Android version from the Google Play Store.

Turn on the phone’s Bluetooth and then launch the app and it connects without any notice to the user. Upon first launch, the app discovered a new version of the car’s firmware. It took a long time to update, but once it did the app was ready to control the car instantly. 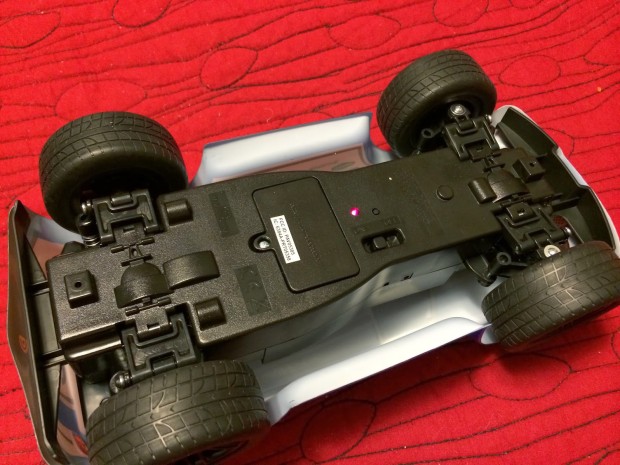 It takes some time to get used to the controls, but once the driver does, they will really enjoy the car. It’s durable and easy to control. The head-to-head features seem like fun. The car costs $99.99, so getting a pair to race one another will cost quite a bit.

We recommend the MOTO TC Rally for real kids and big kids, despite the price. We couldn’t find it for less online.