Groupon had recently published a deal for a refurbished Google Nexus 7 tablet for $189 and listed the original retail price of the tablet as being $260. Users have turned to Reddit complaining that Groupon’s promotion is misleading and deceptive as the original price for the Nexus 7 sold directly through Google through its Play Store online is $199. Moreover, the version being offered through Groupon isn’t a new in-box unit, but rather it’s a refurbished unit. 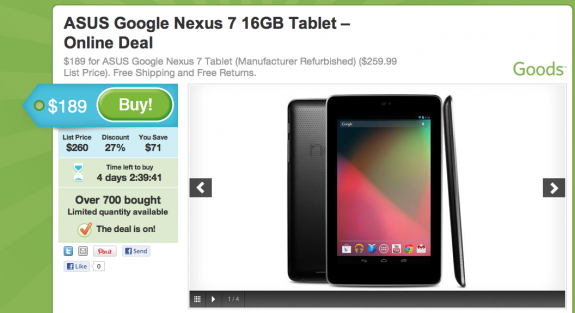 According to Groupon in response to a user’s questions and complaints, the list price calculation used may be from averages from various online merchants who may be reselling Google’s 7-inch tablet at a much higher price than what Google sells the slate for.

We try to offer a variety of deals that interest our diverse list of subscribers. I’m sorry that the deal offered today didn’t appeal to you. Fortunately, we offer more than one deal a day in most cities, and every day brings a new deal!

When the Nexus 7 was initially released, it was frequently out of stock and demand may have created lucrative opportunities for users who obtained the tablet from Google to resell the slate for a profit.

This is a situation really of caveat emptor, or buyer beware. In situations with deals, retailers often list the highest possible retail price possible to show that there is significant mark downs. However, the situation with Groupon takes things to the next level as the actual MSRP listed by Google is $199, and by using some sort of complex calculus to average out higher than retail prices listed by third-party resellers to mark the price up seems unethical at best.