It looks like Rockstar will soon announce a GTA 5 iPhone and iPad app, and while it’s not going to let you play Grand Theft Auto 5 on your iPhone, it will let you perform some customization while away from your console.

Over the weekend retailers broke the GTA 5 release date, putting the much anticipated game in the hands of users across the globe and delivering a lot of new information about the GTA 5 world.

Rockstar’s Grand Theft Auto games include an iFruit brand, which is a play on the iPhone. The iFruit will play a role in the game, allowing users to call characters, check a map, take photos and more.

The new GTA 5 leaks indicate there will be a GTA 5 iPhone, iPad and Android app, but it sounds like Windows Phone will be left out.

As you can see in the screenshot below, there is a prompt for the user to download the iFruit app. 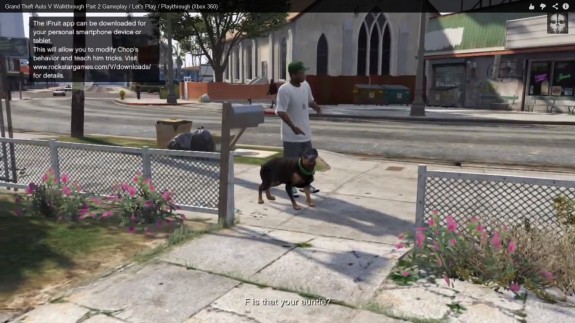 This message comes includes an explanation of at least one thing gamers can do with the GTA 5 iPhone companion app.

Gamers will be able to Change Chops’ behavior and teach him tricks. The screenshot comes from a GTA 5 video stream which came out over the weekend, and has since been pulled from Reddit.

Users who visit the rockstargames.com/V/downloads prompt in the message find an assortment of GTA 5 wallpapers, but no GTA 5 app just yet. If Rockstar is indeed about to release an GTA 5 iPhone and iPad app under the iFruit name, it could arrive in the iTunes App Store on Monday and an Android version on Google Play soon after.

An iPhone GTA 5 app is teased in leaked GTA 5 footage.

It’s not clear if this is the extent of the app of if it will also allow users to manage their stocks and real estate holdings in GTA 5, which play a large role in developing player wealth.

Another possible GTA 5 iPhone app feature could be to integrate with the GTA 5 Online experience, allowing gamers to see when friends are online and to customize a character.

Read: 5 Reasons the GTA 5 Special Edition is Worth the Extra $20

The GTA 5 release date is set for September 17th, with midnight openings at many stores and a GTA 5 download coming to PS3 at 12:01 AM Monday night.