GTA 5 on PS4 and Xbox One remains a question many gamers want answered, and in a recent interview Rockstar North president Leslie Benzies talks briefly about the future of GTA 5.

In a long and revealing interview about Grand Theft Auto Online, the GTA 5 multiplayer component that launches on October 1st, Benzies addresses two questions about the larger role of GTA Online, though he doesn’t go as far to announce GTA 5 on PS4 or GTA 5 for Xbox One, he doesn’t rule them out and leaves room for some hope.

The details come from an interview with Computer And Videogames, which delivers a lot of good new information about the GTA 5 Online multiplayer component.

Specifically, they ask what will happen to this dynamic and ever-growing world when gamers shift to the Xbox One and PS4 in November and in the months after.

Rockstar skirts around talk of GTA 5 on PS4 and Xbox One, but leaves options open with Grand Theft Auto Online.

Right now the in-game demos, like the video below show the GTA 5 world on a PS3, but according to Rockstar there is no major benefit on the PS3 or the Xbox 360.

Obviously we’ve seen the game running on current gen systems, but in three months we’ll be in a situation where next gen consoles will be arriving. How do you plan to develop GTA Online as the audience migrates over the next year or so?

We already have plans for what the next world holds in terms of missions, new content, clothes, apartments, for the next while. But we really want to see what people are playing, and we’re putting a lot of effort into the back end, so we can keep an eye on exactly how long people are spending in deathmatches, races, and all the other modes – just to see what they’re doing. And if we see any peaks anywhere, then we know where to concentrate our efforts. There’s not a lot of data out there for us. There’s very few games like GTA Online – so we’ll play it by ear and see what the consumers want.

This is a positive note, from Rockstar, as the company isn’t coming out and saying there will be no GTA 5 on Xbox One and PS4. If anything it sounds like the company is waiting to see what gamers are playing and doing in the world before announcing any major plans.

If Rockstar is planning GTA 5 on PS4, it’s possible someone in the company is already experimenting or working on it. The big problem is that the Xbox 360 and Xbox One, as well as the PS3 and PS4 are different enough that neither can play a previous generation game. For a more detailed version of why you can’t play GTA 5 for the PS3 on a PS4, read this article that explores backwards compatibility and emulation.

Rockstar is working on a system that will keep your online identity from GTA 5 available across platforms and consoles, which is good news for gamers looking to upgrade to a PS4 or Xbox One.

Combine this with Rockstar’s plans to make Grand Theft Auto Online a growing and dynamic world with new places and there’s hope for more. Benzies said, “The only limitation is the size of the disc and how much memory we’ve got. We could, if we wanted, simulate the entire world, different countries, whatever.” 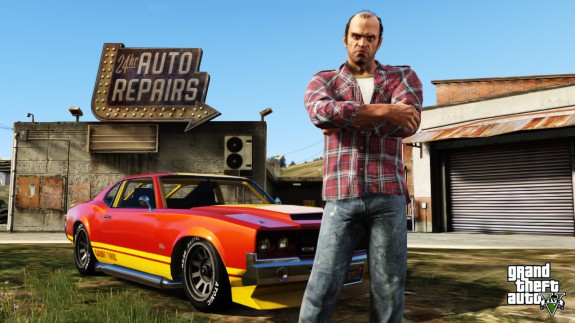 In a followup CVG asks, if new consoles, like the Xbox One and PS4 will help with this, only to get a rebuff from Benzies who states,

“We’ll get the current gen version out first and see what happens in the future.”

Even though Rockstar refuses to talk about GTA 5 on PS4 or Xbox One, the large scale and long term outlook for Grand Theft Auto Online is a good sign. Given the timing of the release of this and many other games, current console owners will likely keep an Xbox 360 or PS3 around to play games like Grand Theft Auto 5 and others for a while, but eventually a new console takes over the entertainment center for the average consumer, and at that point Rockstar will likely want to have GTA Online for PS4 and Xbox One available, and with that could come GTA 5 on PS4 and Xbox One.