The GTA 5 PC release date arrives on Tuesday, and finally gamers will be able to roam around Los Santos on a super-charged, incredibly beautiful version of GTA 5. This is almost two-years after the original GTA 5 release date and for the wait PC gamers get upgraded graphics and they don’t need to wait for the GTA Online Heists to arrive. We also hope that there aren’t new bugs with the GTA 5 PC version, but there’s always a chance of some problem.

This is not the same Grand Theft Auto 5 that arrived on Xbox 360 and PS3. Yes, you still play with the same three characters in the same city, but there are new features. In addition to a graphics upgrade you can now play in first person mode and there is a new GTA 5 Director’s Mode to capture gameplay in cool ways.

After lusting over the GTA 5 PC release for a long time it is finally here and these are the important details that you need to know about the game.

The GTA 5 PC release date is April 14th, one day before taxes are due. If you want to buy the game on discs this is when you will need to wait to play. 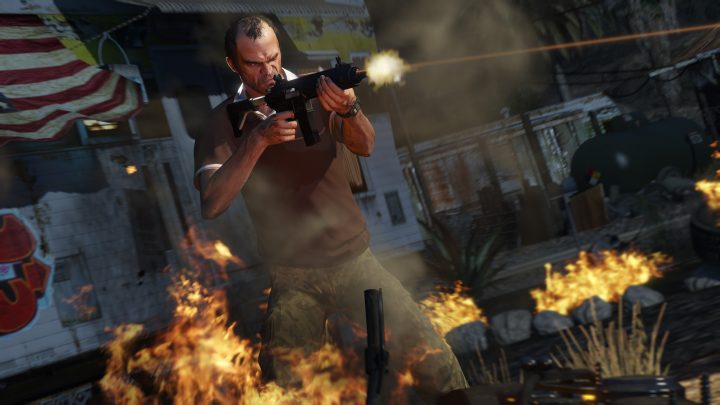 What you need to know about the GTA 5 PC release today.

There is no chance that there will be another GTA 5 PC release delay, so don’t worry about that. We cannot find any midnight GTA 5 PC release date events, so if you want to play right away you should buy digitally.

Rockstar confirmed an early GTA 5 PC release date for U.S. This is only for the digital version, but that’s an option that many gamers will pick.

If you buy the GTA 5 PC digital copy you can start playing GTA 5 at 7:PM Eastern 4PM Pacific on April 13th. That’s a nice early start for gamers in the States. This syncs up to the GTA 5 PC release at midnight in the UK.

Watch the GTA 5 PC video above, which is a GTA Online Heists TV spot filmed on the GTA 5 PC release. You’ll want to bounce over to YouTube to watch in 1080P HD. Check out the GTA 5 PC screenshots below to see what the game will look like.

You will need a pretty good PC to play GTA 5 on, but you can find some good suggest GTA 5 PC builds starting around $400 and up to well over $3,000 depending on your budget. Check out the GTA 5 PC requirements below and the recommended builds on GTA 5 Cheats.

If you buy the digital version you’ll want a speedy Internet connection to start the huge download that clocks in at over 60GB. Check out more about the GTA 5 graphics options that you’ll find on your PC soon.

GTA 5 PC delivers exciting new features like a video editor and a director mode. If you are excited you need to read this account on PC Gamer and watch the video below to understand what the new GTA 5 PC will deliver.

In the video we hear that when the game is turned up to max it can hit 4K with two graphics cards and a i7 processor. You can also check out the video below to see what the RockStar Editor delivers.

See you in Los Santos.