Granted, this doesn’t necessarily confirm that a PC version is coming. In fact, we saw a similar listing appear around this time last year, so it’s always a wise word to believe that retail listings don’t necessarily mean that a product is real.

However, we are expecting a PC version of the game, despite Rockstar not officially announcing anything yet. Past GTA titles have been released on PC, and we’re also still waiting on Xbox One and PS4 versions to hit the market as well. 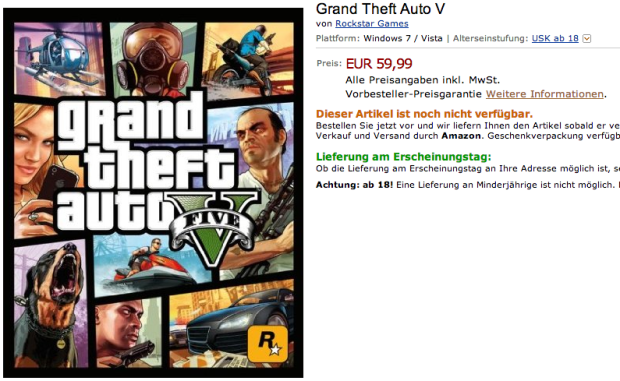 Take-Two Interactive will announce its third quarter earnings on February 3, which is just right around the corner and would be the perfect time to announce the PC version, as well as Xbox One and PS4 versions. That will mark close to the five-month mark from the initial release date of the game. GTA 5 was released on September 17 last year, with Grand Theft Auto Online launched on October 1.

Previously, we’ve been hinted at a PC version, as well as next-generation console version thanks to in-game code that point to these versions. The alleged GTA 5 code came from the pirated version of the game, and shows references for “Orbis” and PC configurations. “Orbis” was an early code name for the PS4 dev kit, which means it’s possible that Rockstar has been playing GTA 5 on the PS4 internally.

In any case, we’ll have to and see what happens in the next couple of months, but hopefully new versions get announced come February 3.