Xbox 360 and PS3 users can expect more audacious clothing and stylish vehicles to arrive in what Rockstar Games is calling the I’m Not a Hipster update for Grand Theft Auto Online, the multiplayer part of last’s year’s best-selling GTA 5 open-world game.

Rockstar announced the coming update earlier today on its blog, and like all GTA 5 related content the I’m Not a Hipster update is specifically meant to add some features that everyone will love will poking fun at society. In this case, its making fun of people who like to wear thick glasses and drive miniature vehicles.

As for clothing, Rockstar says that the GTA 5 update will contain tons of customized t-shirts so that users can “express their incredible individualism.” Users can look forward to customizing their GTA Online character with custom print t-shirts, tight skinny jeans and tattoos after the update. the I’m Not a Hipster update includes animals and a few new popular hair styles too. 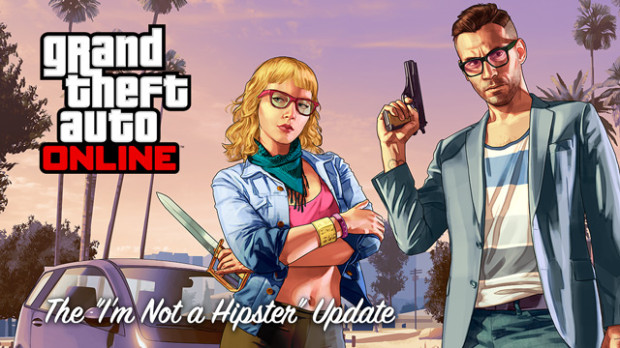 Contained in this update are six new cars: the Glendale, Warrener, Blade, Rhapsody and Dubsta. Users should expect a few surprises from each of these after they’ve had them customized to their liking. There’s also the Panto, a ridiculously small subcompact car that Rockstar created just to make fun of real-life compact cars like the Fiat.

This GTA 5 update will also include an antique dagger for taking down enemies and a pistol that looks remarkably similar to the weapons that 1980s police officers carried.

The Grand Theft Auto series has earned a reputation for poking fun at pop culture with in-game radio and clothing, but it’s really the content that keeps players coming back for more. That’s especially true since Grand Theft Auto Online is the first multiplayer sandbox to be introduced in the series. For gamers to keep coming back Rockstar has to offer die-hard players more missions and more things to do.

The I’m Not a Hipster Update for GTA 5 delivers a ton of new content so that fans have reasons to keep coming back. There are three new Gang Attacks for users to do battle with local neighborhood hoodlums. And tons of new races for users to earn classic cars that they couldn’t before.

Finally, Rockstar is tweaking tons of little tiny aspects of the game.  Users can now buy 10 new vehicles directly from the game’s car selling website without having to track them down in the game world. They can now purchase customized horns and tint their vehicles as well. Many of these tweaks are specifically related to small scenarios, but they’ll go a long way toward keeping Grand Theft Auto Online for GTA 5 more vibrant and full of life.

Xbox 360 and PS3 owners shouldn’t have to wait long to get the I’m Not a Hipster update. Simply turning on the Xbox 360 or PS3 and trying to load the game should trigger the update. PS3 owners will get the update on the first try. However, Xbox 360 users will need to download a compatibility update before they can get the I’m Not a Hipster update. To be clear, this new content is contained in a title update not downloadable content. As such, it’s absolutely free for all Xbox 360 and PS3 users with a copy of Grand Theft Auto 5.

Today, users will need an Xbox 360 or PS3 to get their hands on GTA 5 and the I’m Not a Hipsterupdate, but that won’t always be the case. At this year’s Electronic Entertainment Expo Rockstar announced that Xbox One and PS4 users would be able to pick up a version of GTA 5 for those consoles later this year. Presumably, the content Rockstar is adding here will also be available in those versions when they launch.