GTA Online arrived early this morning as a free update to the GTA 5 game that players bought in the middle of September, but the first day of gaming may not involve much gaming.

This morning the GTA 5 update arrived before most of the east coast went in to work, and the path downloaded fast enough, but then the trouble started.

GTA Online is activated by picking the bottom character in the character selection wheel, just like switching between characters in the story mode.

When we tried to activate GTA Online this morning the Xbox went to a black screen as soon as we selected the online component, and the screen stayed black until we quit GTA 5 and started over. Repeating the process to play GTA Online resulted in the same black screen which lasted for 10 minutes before we gave up. 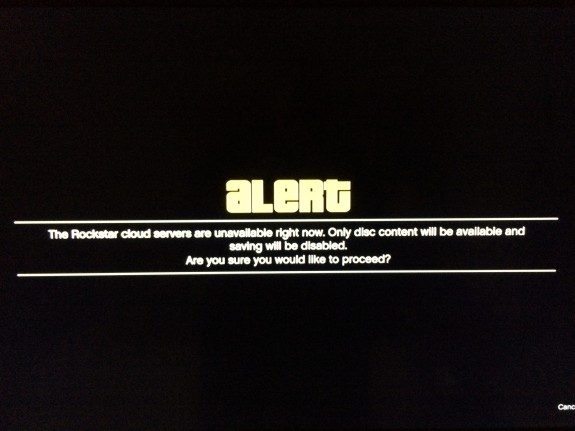 GTA Online problems, like this one telling gamers “The Rockstar cloud servers are unavailable right now.” are hampering the GTA Online release.

We’re not alone as gamers are turning to Twitter to complain about server outages, bugs and other GTA Online problems.

@RockstarSupport Been trying to do this first race, just never loads.. been dash boarding and retrying for the past hour. Xbox 360.

Giving up with GTA Online for a bit, couldn’t even access character creation. At least I got to listen to @SteMacD enjoying his game -_-

GTA online isn't working for me…

It’s good to see that Rockstar is on the issue and is constantly updating and responding to gamers on Twitter. Rockstar predicted issues with GTA Online as millions of gamers who bought GTA 5 attempted to connect in a short period of time.

Some gamers report success by skipping the character selection wheel and picking the online tab from the pause menu. When we tried this we got an error that Rockstar cloud servers were offline, and only disc content would be usable.

Hopefully Rockstar can optimize the servers during the day, so that gamers can play when they get home from work and school later tonight, but if we’ve learned anything in the last year of online gaming it’s that things take time to fix.