Available now for just $6.99, GTA: San Andreas is a pretty in-depth remastered version of the same game that made its way to the original Xbox and PlayStation 2 last decade. That means the same missions, the same crimes and the same characters users already know and love from the game are here, though they’re better looking thanks to some updated graphics. 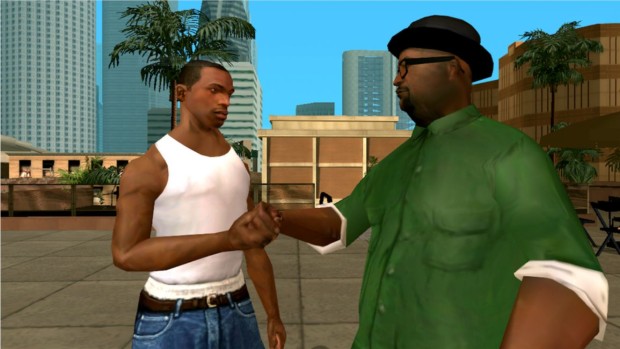 Of course, Android being a mobile experience first, users can play the game with new touch screen controls that have been reworked. That being said, GTA: San Andreas really shines for users who have a third-party gaming controller like those made by MOGA and Samsung. Rockstar Games, the game’s developer, has added controller compatibility to give buyers a more console-like experience for those users who simply can’t play action-adventures games well on a touch screen.

Rockstar has even added cloud saving support so that users can enjoy the game on multiple devices and always pick up where they left off. According to the game’s page in Google Play, GTA: San Andreas for Android includes 70 hours of gameplay, easily making it worth Rockstars slightly higher-than-average asking price.

Reviews on that same Google Play page indicate that some users are having a hard time getting the game to work. Rockstar is recommending that users download the game and restart their phone to get the best performance. Users will definitely want to clear out some space on their device before initiating the download too. All told, the title occupies about 2.5GB of storage. Users with Android 2.3 or higher should be able to get the game working on their device as long as their device has a fast enough processor and enough RAM to make the game playable.

Originally, Rockstar Games announced that the GTA: San Andreas would be available on Microsoft’s Windows Phone too. So far, that edition has yet to materialize.