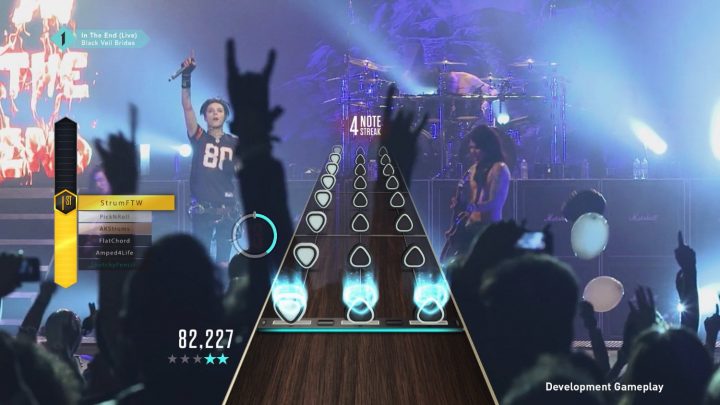 Get ready to rock on the Guitar Hero Live release date. 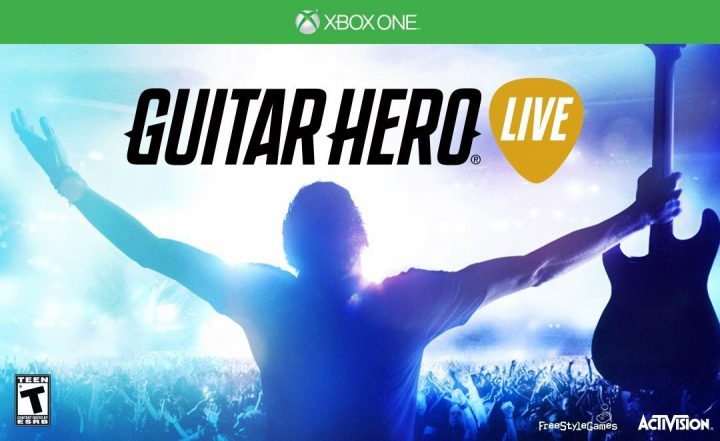 Guitar Hero Live is available for most consoles and is coming to iPhone, iPad and Apple TV.

Guitar Hero Live is available on Xbox One, PS4, PS3, Xbox 360 and Wii U. The game includes a new Guitar controller with the $99 version.

You can buy Guitar Hero Live at Amazon, GameStop, Best Buy, Walmart and other retailers.

Guitar Hero Live includes a new controller and support for a USB microphone so you can sing and play guitar.

The audience is no made up of real people that will make the task of playing a killer show more challenging than cartoons booing at you. Play in real life venues and with band members who will react to you.

GHTV is a music video network that you can play all the time. This includes options to play a channel, play while other people watch the music video and there are options to see live concerts.

The wireless controller is also coming to the Guitar Hero Live iPhone, iPad and Apple TV release later this year.

If you want to get into the Guitar Hero Live release date early, you can head to most GameStop locations now to play the game early using the new controller.

Use this tool to look for a GameStop near you that is hosting an opportunity to play the game. 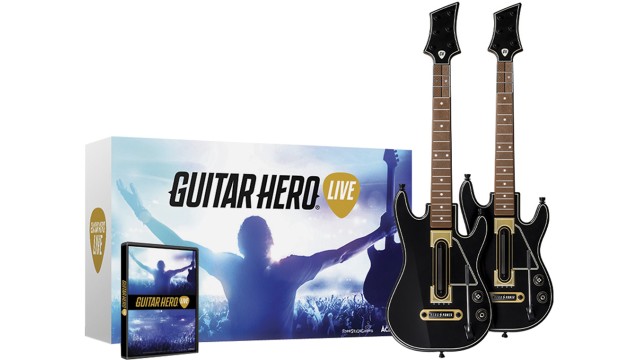 There is a single Guitar option and a 2-pack of Guitar Hero Live guitars available. The game is $99 for the base model and $149.99 for the two guitar option.

You cannot use an old Guitar with the Guitar Hero Live game, so if you want to play with two players at the same time, you will need to invest in a second controller.

There is a new six-button layout that delivers a more realistic feel when switching between strings on the guitar. The Strum bar is untouched, so you can get back to strumming just like you used to.

There is a new Hero Power button you can use in the game, or you can tilt the guitar. There is also a whammy bar that many players love. A Guitar Hero TV button will deliver you right into the GHTV game mode. It’s also wireless.

There is no pricing for an individual controller yet, so you may want to invest in that two pack.

There is still time to save with Guitar Hero Live deals that offer a decent amount of savings to buyers without waiting for the game to go on sale.

Best Buy offers a $10 gift certificate when you pre-order Guitar Hero Live. This is also good on the base package or the two-guitar bundle. If you are a Gamers Club Unlocked member you also save 20% on either in addition to the pre-order bonus.

While many games this year arrive with a lot of fanfare and midnight events, there are no midnight Guitar Hero Live release date events planned at Best Buy or GameStop.

If you plan to buy Guitar Hero Live at Walmart, you will likely be able to walk in and pick it up at 12:01 AM, if your local store is open all night.

You cannot buy a Guitar Hero Live digital download, which means you will need to swap disks when you want to play the game. This also means you cannot pre-load the game and play right at midnight.

The Guitar Hero TV option will stream channels of songs to you that you can play at no extra charge as long as you want to play in the order.

The model is like Spotify. You can listen to the radio channels free, but if you want to be able to play or listen to a song at any time, you have to pay. You can use the coins you earn in the game or make a purchase with real money to get new Guitar Hero Live songs.

The Guitar Hero Live song list is massive at the start, and we expect to see more arrive as the game matures in the coming weeks and months. There are over 100 songs on the Guitar Hero Live playlist now, and Activision promises more to come.

You can listen to the songs on the Guitar Hero Live playlist above, and you can check out the song list that spans decades and genres to see if your favorite song is on the list.

As we mentioned in the play Guitar Hero Live early section GameStop is offering a $100 gift card to users who post to Twitter and Instagram while playing Guitar Hero Live at GameStop. You need to tweet the hashtags #BeAGuitarHero and #Sweepstakes

This contest runs through October 25th, and you can see more details about it on the Guitar Hero site.