On the Xbox 360 I bought in big to the rhythm gaming with Guitar Hero and Rockband — even though my apartment at the time didn’t really have room for all the instruments. 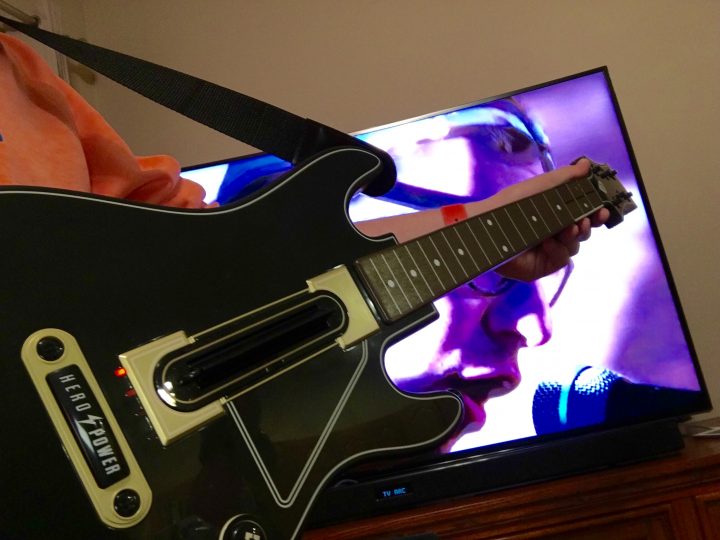 Is Guitar Hero Live worth buying for the iPhone or iPad.

The short version of the Guitar Hero Live review is that the iPhone and iPad version delivers portable fun, even if the main story modes is light on songs. The Guitar Hero TV mode offers up access to a huge catalog of songs, and you can play without buying them — as long as you want to stick to the schedule of songs that play through like a MTV style show.

You can pair the new guitar to the iPhone or iPad and play anywhere you want. I also use AirPlay to play Guitar Hero Live on the new Apple TV or a Lightning to HDMI adapter to connect to another screen when I want a bigger view.

Guitar Hero Live is a fun game and it is a game that is best enjoyed with friends. While using the Guitar Hero Live iOS app, it is very easy to take this to someone else’s house or to take it with you while traveling. 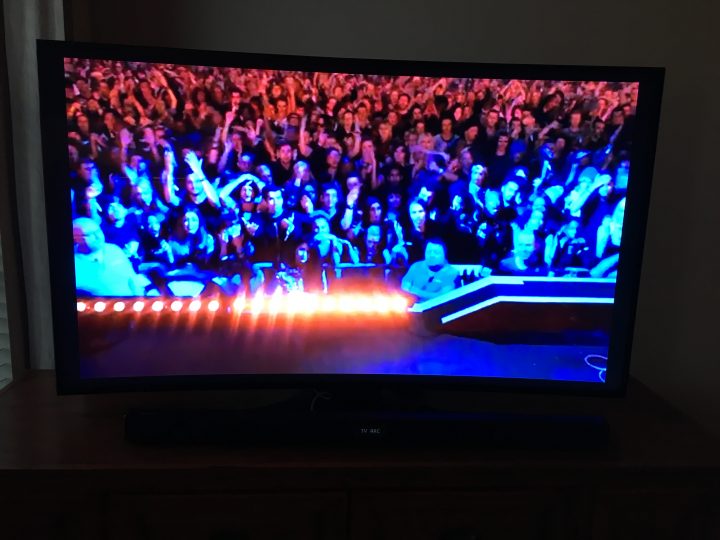 The crowd is a huge part of Guitar Hero Live.

No, you aren’t going to pack the Guitar Hero Live controller in your luggage for a flight, but if you have your iPhone or iPad it’s easy enough to bring the game to a party or to a friend’s house. That’s not as easy to do with the Xbox or PlayStation version of the game.

Pairing the Guitar Hero Live controller to the iPad was easy and the connection was reliable. This is important considering the fast pace of the game and the need to strum and press buttons on the controller at just the right time.

The main Guitar Hero Live mode includes a series of shows that you play with different bands in a collection of venues. Instead of an animated crowd, you are on stage with bandmates played by real people and the audience is full of real people who will sing along when you are on fire and who will boo or look annoyed when you can’t hit more than a few notes in a row. 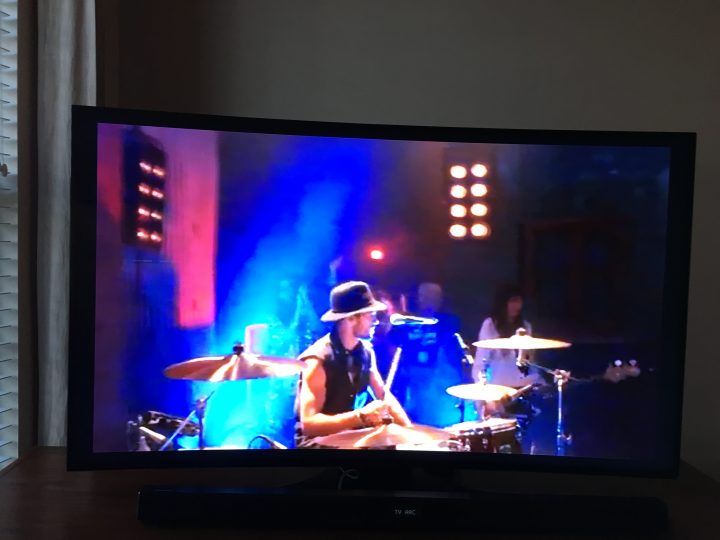 You will interact with bandmates, but they aren’t particularly memorable.

I found myself focused on the crowd more than on bandmates, but there are many breaks where your character looks around in an attempt to form a connection with the other band members. This is nice, but the crowd remained the focus as I tried to please them.

The biggest complaint I have with Guitar Hero Live is that the skill level jump from casual to regular is massive. Casual will be too easy for most gamers. It only uses the bottom row of buttons and notes are spread way out. Jumping up to Regular mode takes things to an entirely new level with the bottom and top row as well as combined notes in almost every song — as well as a major increase in the number of notes on-screen.

This leads to a problem as many users will find the Casual mode too easy to enjoy for more than a song or two, but the Regular mode to difficult to pick up in a party setting. Ideally there would be more of a step up between these modes to make sharing the experience easier.

Guitar Hero TV is where I ended up spending a lot of time. This offers blocks of songs similar to a music video show that aired on MTV when I was growing up. The standard way to play this mode is to see what is on the two channels and then start playing, but you can also use play credits that you earn to play these songs on demand. If you want to play the song over and over you will need to use play credits you earned or buy them with real cash. A third channel is coming to GHTV to add to the variety. 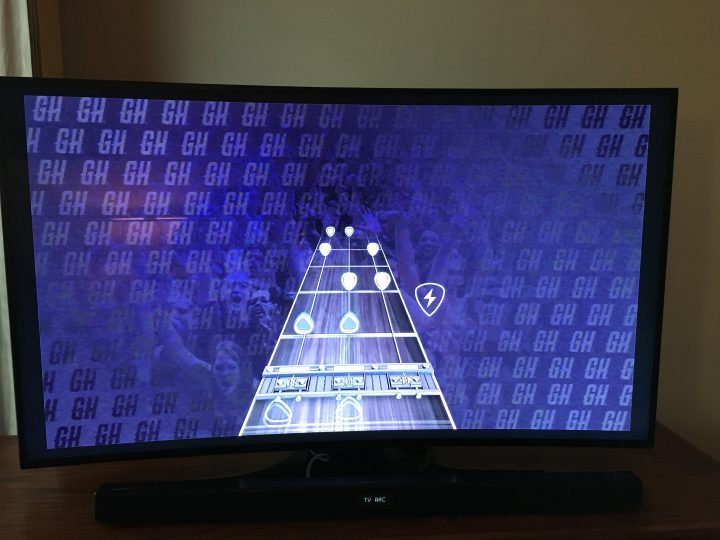 One complaint is that the jump from Casual to Regular mode dramatically increases the difficulty.

In most instances I jumped into a GHTV channel and played through song after song, losing track of time more than once. The songs feature real music videos and flow from one song to the next as you play at a good pace. This is a fun mode, but you are limited to what is on the channel when you decide to play. A few times I entered GHTV mode and wasn’t a fan of what was on either channel, but the selection is broad enough that normally I found one channel to dive into and play.

I prefer to play a variety of songs, and I am not focused on mastering a particularly tough song on Expert — so I did not find myself using or buying play credits to go back and play a song over and over and over on demand. If you like to do that, you may end up spending a lot of cash or investing a lot of time playing other songs to earn play credits. There are a lot of Guitar Hero Live songs, but you don’t have on demand access to all of them from the start — even if you beat the campaign.

Is Guitar Hero Live Worth Buying on iPhone or iPad? 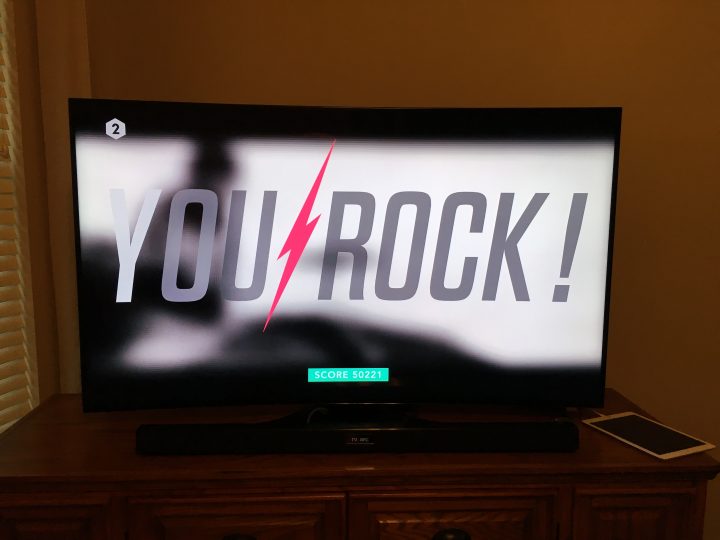 Guitar Hero Live is fun, portable and the controller is great with the iPhone and iPad.

Ultimately you want to know if Guitar Hero Live is worth buying on the iPhone or iPad. After spending just under a month playing the game on the iPad and on an Apple TV using the Bluetooth controller it is easy to recommend this game for most users.

The difficulty jump from casual to regular is steep, but ultimately when you play on your own this is a skill you will need to pick up and in a social setting the game is still fun on these two modes.

The portability and varied song options — plus the new controller all add up to a fun experience on the iPhone and iPad. When you need a bigger screen it is easy to play with AirPlay to the Apple TV or to connect with a Lightning to HDMI connector to almost any HDTV or monitor.