Behringer’s Guitar Link UCG102 connects a guitar to a computer or an iPad turning them into an amp and recording studio.

It connects via USB and sends the audio signal from the guitar to the computer or iPad. The Guitar UCG102Link works well and gives pretty decent sound for amateur situations or for simple recording at home, but I wouldn’t trust it for pro applications.

The Guitar Link connects to any USB and works with both Mac and PC. Users can also connect it to an iPad using the iPad Camera Connection Kit. I tested it on a MacBook Pro and on my iPad using GarageBand primarily.

The included software for use on the computer comes from Native Instruments and offers a complex system that mimics stomp boxes, amps and records music. Users can upgrade the included software for an introductory level recording studio in the home or use software like Audacity, one of my favorite audio recording apps, or GarageBand. I use Audacity at church to record our services for distribution to shut-ins. 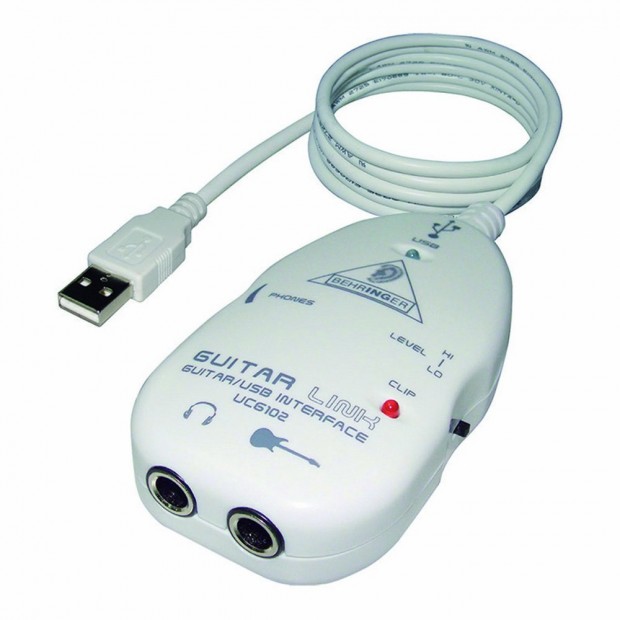 After installing the drivers and software, my son plugged his guitar into the quarter-inch jack on one end of the Guitar Link. It also offers a second quarter-inch jack for a pair of headphones. So users can hear their music as they play. The Guitar Link requires that the user plug head phones in while plugged into the iPad, otherwise he or she can’t hear the audio over the iPad.

Daniel played his guitar and the system worked well for his simple needs. He tested out the various amps included in GarageBand and played a song which he recorded onto the iPad.

On one side of the Guitar Link there’s a volume level dial which controls volume to the headphones. The other side has a switch to move from Hi to Lo recording levels. An LED indicates when the Guitar Link experiences clipping (too much audio that overruns the system). Towards the USB end of the device another LED to shows if the Guitar Link is properly connected to USB. This helps because a player might get carried away and yank the cable out of the computer or iPad.

The Guitar Link works really well. It produces good sound. The hardware feels like its made of good quality materials that won’t fall apart with heavy usage. Get long cables to plug the guitar and headphone into the Guitar Link so there’s no risk of pulling the computer or iPad off the table or stand while jamming on the guitar. The USB cable is long enough to stay connected so long as the guitarist doesn’t start running around as she plays.

I’m not crazy about the included software. It works okay, but I preferred using GarageBand on my Mac and iPad and tested the device with them instead. I also don’t think serious musicians will like the Guitar Link. For someone like my son who’s just learning, it works well. I don’t recommend it for anyone with professional needs.

The Behringer Guitar Link compares well to the Griffin GuitarConnect Pro I also reviewed. The extra headphone jack makes the Behringer device bigger than the Griffin, which means it takes up twice the space in a guitar case or computer bag. Since most computer and iPad users already have ear buds or headphones that connect directly to their device, this doesn’t add enough functionality to make me give it the nod over the Griffin product. The biggest difference is price. The Griffin GuitarConnect Pro cost twice as much as the Behringer Guitar Link UCG102. The Griffin isn’t as versatile either since it only works with an iPad, but the Guitar Link works with iPad and computer.

Users deciding between these two products based on price, it’s no competition. The Behringer Guitar Link UCG102 costs only $32.60 at Amazon. For players that want something that works with both computers and the iPad, again the Behringer products wins.

For simplicity and compact size, go with the more expensive Griffin and for iPad only users who doesn’t care about the money, I like the Griffin GuitarConnect Pro better. There’s no need for  headphones and it’s simpler to use.