The saga of does the LG-made Google Nexus 4 support LTE continues as hacks have proven that the device does work on AT&T’s 4G LTE network, albeit in select markets. Despite Google‘s and LG‘s insistence that the Nexus 4 does not support nor have a functioning LTE antenna to make whatever traces of an LTE modem work, hackers have gotten the device functional on AT&T’s LTE network with LTE download speeds in select markets.

As it stands, the hack isn’t perfect, and it seems that upload speeds may still be handled over AT&T’s slower 4G HSPA+ network, rather than LTE, given the results of speedtests after the hack was enabled. 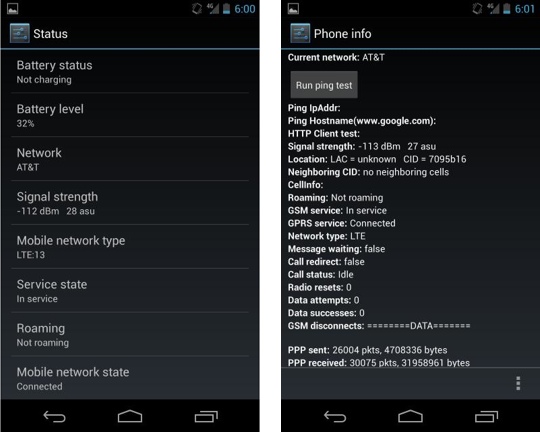 LTE hacked support was already available for some time before for users in Canada.

The way the hack works is that XDA member checkitonetime managed to use the Galaxy S III APN, or access point name, on the Nexus 4. This enables the smartphone to access AT&T’s Band 4 frequency, but at this time Band 4 is still not widely deployed. It is only available in Phoenix, Raleigh, San Juan, Los Angeles, Las Vegas, Oklahoma City, Dallas, Chicago, Charlotte, Athens, and College Station, according to Android Community.

Band 4 is a different spectrum than the more widely deployed 700 MHz spectrum that AT&T is using for most of its national coverage.

It’s unclear if software tweaking can enable LTE support on different frequencies in the future.