We already knew Halo 5: Guardians, this fall’s must-have title for Microsoft’s Xbox One entertainment console, was getting different bundles for dedicated fans of the first-person shooter series. At long last we’re finally learning more about those different editions thanks to a new leak of the Halo 5: Guardians Limited Edition online.

The Italian subsidiary of gaming retailer GameStop posted pictures and provided more details about the Halo 5: Guardians Limited Collector’s Edition bundle this week. Even now the details are still available for anyone and everyone to read on the site, despite Microsoft not having formally talked about the different versions of Halo 5: Guardians arriving on October 27th. 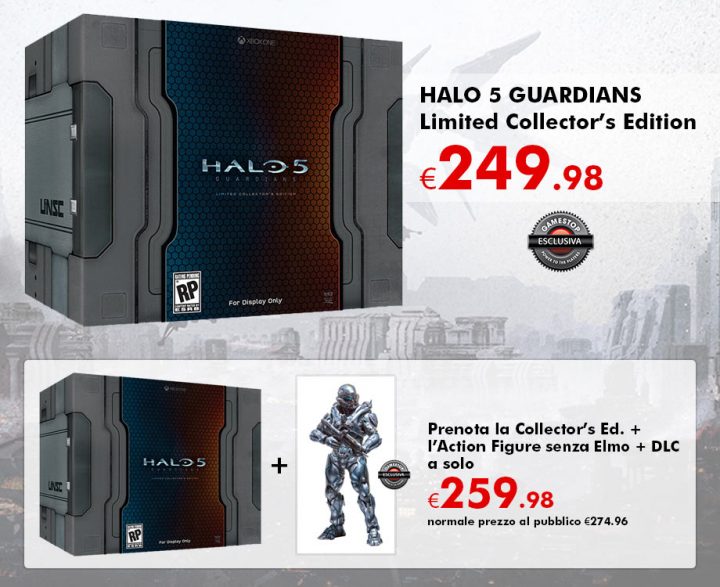 Costing every shopper $249.99, we now know that the Halo 5: Guardians Limited Collector’s Edition bundle will include a special statue that users can put on a shelf to mark the game. We don’t know if it’s a statue of main protagonist John 117 or rival Agent Locke. GameStop is only saying that what’s inside is a “commemorative statuette created by 343 Industries” and that more details are coming down the road.

The U.S. version of GameStop’s website doesn’t include any additional details about the statue nor does it showcase the newly revealed box art for the Halo 5: Guardians Limited Collector’s Edition bundle. It does note that shoppers in the United States get a Limited Edition Halo 5: Guardians poster with their purchase if they pre-order. GameStop shoppers also get Spartan Locke’s Hunter armor at no additional change. GameStop is describing this armor as a “pre-order exclusive,” so buying there may be the only way to get the Hunter armor early on. This armor is only available to users who play the game’s multiplayer.

In Halo 5: Guardians, series protagonist John 117 is being hunted by another Spartan, Agent Locke. It’s Agent Locke’s assertion that the Master Chief is almost a false god, a traitor who’d long turned his back on humanity and anyone else that would get in the way of him achieving his own ends. It’s a story line first hinted at during the beginning of Halo 4, which launched on the Xbox 360. Halo 5: Guardians won’t be coming to the Xbox One.

Microsoft is promising plenty of multiplayer upgrades for this release. Any Spartan can run as much as they’d like. The game’s controls have been tweaked. Clamber lets users grab on to the end of a ledge and pull themselves up when they miss it. Jets built into the back of every player’s armor let them take out anything below their landing area with a move called Ground Pound.