With Halo 2 turning 10 years old soon it was expected that Microsoft would reveal a version of the game running in high-definition on the Xbox One. After all, that’s what the company did for the anniversary of the Halo: Combat Evolved. Instead, Microsoft is dropping a proverbial nuke on Halo fans, with Halo: The Master Chief Collection. 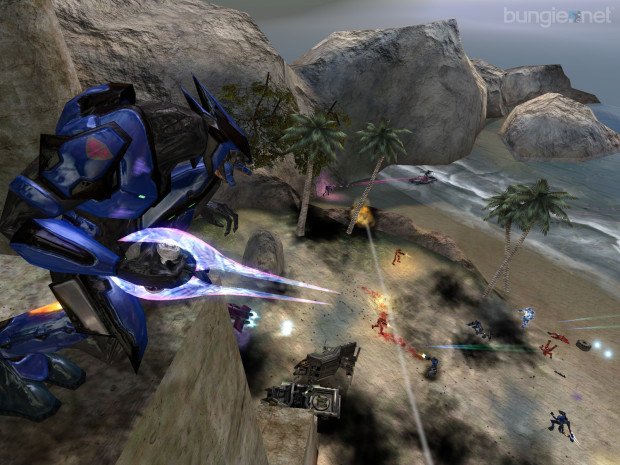 Xbox One owners will be able to pick up Halo: The Master Chief Collection and play from the beginning of the known Halo saga to the very end, and all of the titles include on the single disc will run at 1080p and 60 frames per second. In short, all four games will look better than even Halo 4 did when it launched on the Xbox 360 roughly two years ago.

Microsoft says that the Halo 2 section included on the disc will have remastered cut scenes, new terminals that reveal more about the franchise and skulls for a little bit of added fun. Buyers can also expect to switch between the high-definition remake of Halo 2 and the way the game looked when it shipped for the original Xbox with just the press of a button. That way users get some nostalgia along with upgraded graphics that only the Xbox One can provide.

Halo: The Master Chief Collection buyers won’t just be treated to remade cut scenes and single player experiences either. Each game’s multiplayer will be included on the disc as well and all of the series’ added content like map packs will be available in this package as well.

To sort through all of this, a new mega menu will allow Xbox One owners to hop from mission to mission using a sort of playlist that’s never been tried before. At today’s Xbox E3 2014 Media Briefing Microsoft said that the game will including a whopping 4000 gamer score, the most that any Xbox game has ever made available to players. As such, gamers can earn even more achievement points by simply replaying their favorite levels from past games.

It’s not just the games itself that’ll have Xbox One owners racing to their local game stores. 343 Industries confirmed that The Master Chief Collection will include an exclusive digital live action series called Halo: Nightfalll. The series will air weekly for users who have purchased the game and reveal more story elements concerning “an all new character that is pivotal to Halo 5: The Guardians,” according to a post on Xbox Wire. The series will be produced by Ridley Scott.

Remakes are great, but it’s likely that fans are more excited to see where Halo 5: The Guardians takes the series next. To that end, users will still want to pick up Halo: The Master Chief Collection because it’ll act as their ticket into the Halo 5 Beta when it begins this coming December.  That’s awfully soon for a game that many thought wouldn’t be arrive until the winter of 2015. In fact, with a Beta in the winter its entirely possible Microsoft is planning for a mid-year release instead of a late 2015 release. The company also revealed a short trailer for Halo 5: The Guardians today.

Microsoft says Halo: The Master Chief Collection will be available for $60 when it debuts on the Xbox One on November 11th to mark the 10-year anniversary of Halo 2. As noted above, Xbox 360 users need not get excited for this game, it’s coming exclusive to Microsoft’s next-generation Xbox One console.