Today Barnes and Noble announced their new Nook eReader, which is strikingly similar to the “old” Nook eReader. The updated model adds a new feature that aims to solve the last major problem with eInk eReaders: you need a light if you want to read in the dark.

The new Nook adds a feature dubbed GlowLight which lights up the eInk display with an adjustable, easy-on-the-eyes light that is bright enough to read by but not enough to disturb someone next to you. Say, late at night in bed.

Despite the additional component, the Nook retains the long battery life — over one month of reading using the GlowLight, up to two months without — and comes in 5% lighter than the current Nook Simple Touch model, which is already pretty light. The GlowLight option adds $40 to the price, bringing the total to $139.

eBook lovers can pre-order the new Nook Simple Touch with GlowLight today in B&N stores or online at Nook.com. It will ship and be available in stores at the beginning of May in time for Mother’s Day.

Watch my short hands-on video below for a quick demo.

Though Barnes & Noble claims that they’re the first to develop this eInk with benefits thing, that’s not quite true. Unless you’re a long-time eBook nerd like me I won’t blame you for not remembering the Sony Reader PRS-700 that came out back in 2008. It didn’t make a huge impression due to the dominance of the Kindle, but it did have lighting on the eInk screen for reading in the dark.

Sony’s implementation of this idea was less than ideal. It didn’t light the display enough to make a huge difference and, thanks to how glare-y the display needed to be to make the touchscreen functionality work, it ended up being a wash overall. 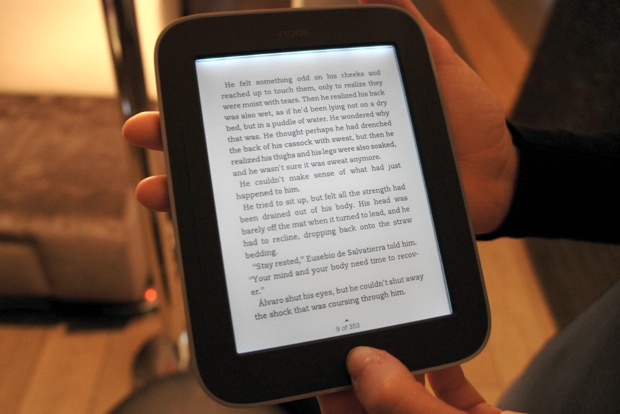 The Nook with GlowLight doesn’t make any of those same mistakes, thus I think it will be far more successful. First, the technology B&N uses for touch doesn’t require a glaretastic display, so text remains crisp and contrasty. Second, the way the GlowLight is engineered, the light is aimed down at the display so it bounces off the screen, the same way light bounces when you’re out in the sun. The light itself is a nice bluish white instead of the orangey cast I remember from the Sony. And it lights up the entire screen evenly.

I got to go hands-on with the new Nook in a darkened environment so I could get a real sense of how the light would look in a bedroom at night. Since the intensity of the brightness is adjustable I was able to easily find a level comfortable for my eyes. Yet even at the brightest it’s not going to light up the room. 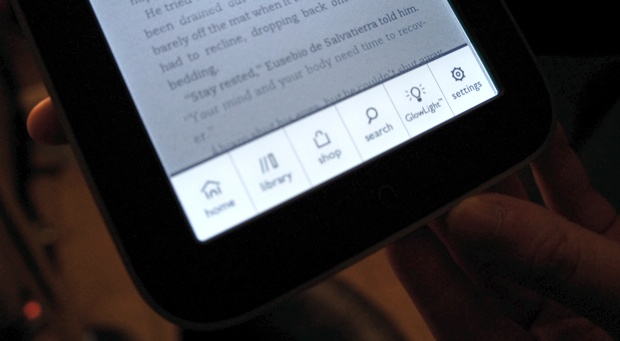 The use case B&N touted the most is reading in bed. According to a survey they conducted, 2 out 3 people read in bed and 50% of respondents said they would read more in bed if it didn’t bother their partners. Almost half of non-night reading people get annoyed with their bedmates leaving the light on when they want to sleep. Keeping a light on so you can finish the last two chapters of The Hunger Games is apparently not conducive to a happy relationship.

I can also see this being useful when reading on a plane, or an overnight train trip, or even in the back of a car. I know I would have appreciated that as a kid.

The GlowLight is also supposed to be much easier on the eyes than the backlight on an LCD tablet or a computer screen. And, since the display is the same eInk as the current Nook, you can read it while out in the sun, which is harder with tablets.

We’re getting a Nook with GlowLight in for review soon, so I’ll be able to put it to the test during late-night reading sessions and report back in full. But if you’re already sold, head over to Nook.com and pre-order yours for $139 today.