Last year Identity Games launched the GameChanger, a clever blend of traditional board games and the iPad that made tablet gaming more family-friendly. You can check it out in our holiday gift guide.

This year the company is expanding on the idea — or, I should say, shrinking it. At Toy Fair they showed me an early version of the GameChanger XS for the iPhone and iPod touch.

Just as with the larger GameChanger, the iPhone connects to the game board via the 30-pin connector on the bottom which allows it to sense touch and game pieces on the physical game board. The XS is designed more for quick gaming challenges and folds up, making it a portable party that fits in a pocket. Watch it in action in our hands-on video.

The three prototype games Identity demoed show the initial range of offerings. There’s a Dance, Dance Revolution/Guitar Hero-type music game, a short board game, and a ship battle game. Each is designed for 2 – 4 players and also designed for brevity.

One of my favorite things about this game system is that it’s expandable. The XS pad itself is just a base, so it’s possible to put new “skins” on top of it for different games. All you need is the corresponding app and switching between games is easy. 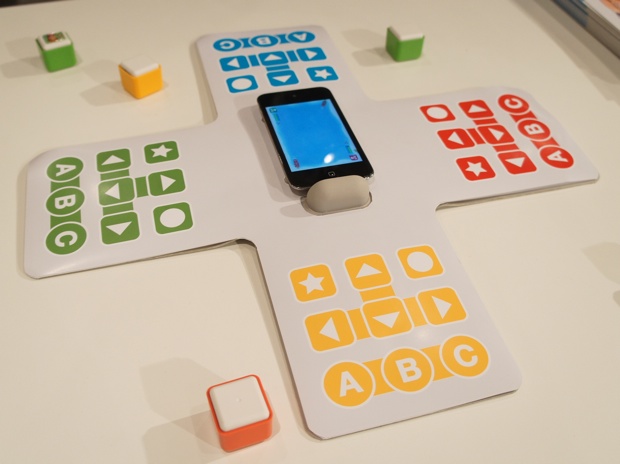 I’m a big fan of this idea because it makes iPhone gaming less isolated. Playing with friends via a virtual conduit is fun, but being able to play together in real life with live interaction is better. Well, if you like your friends…

There’s no firm pricing on the GameChanger XS or individual games yet, but don’t expect either to be very expensive. It won’t be out until the Fall, unfortunately. Still, that’s just in time for the holidays.