Hands-on: Sid Meier's Pirates! (iPad) Is One of the Best

If you’re a fan of the pirate genre and are still smarting over this summer’s hollow and forced Pirates of the Caribbean: On Stranger Tides, we have the perfect antidote. Sid Meier’s Pirates! from 2K Games is one of the best games to arrive on the iPad. While it may not quite sport the cutting-edge graphics of other iPad titles like Infinity Blade or 9mm, it brings solid visuals nonetheless, and – more importantly – fun, addictive, free-roaming gameplay.

If anyone is wondering who in blazes Sid Meier is, he is the creator of the über-successful Civilation franchise of real-time strategy games. Pirates! actually came before that though – as it first showed up in the 1980’s on the Commodore 64 (and pretty much every other system that was around at that time). Have no fear, though, the iPad version stems from a 2004 remake (for PC) and sports modern-day graphics. 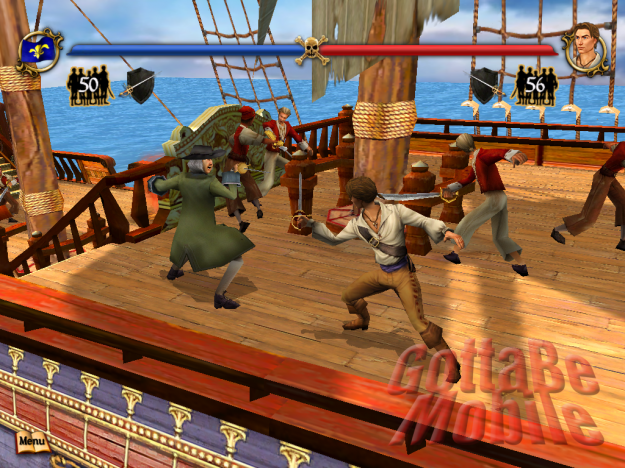 If you missed out on Pirates! the first (or second, or third…) time around, then the iPad version is a great port to start with. After naming your pirate you learn of your character’s story of betrayal, and have the choice of allying with the English, Spanish, French, or Dutch. The country you ally yourself with will determine your expected loyalties in the game, but you are never bound to staying with any of them (more on that later).

Once setting sail, you are free to roam the high seas any way you see fit. You can drink in bars and milk the patrons for juicy information (which often lead to missions), choose to attack (or not attack) ships you pass, bombard settlements, trade with merchants, upgrade your ship… the depth of the gameplay is in the spotlight here. It rises to the occasion. 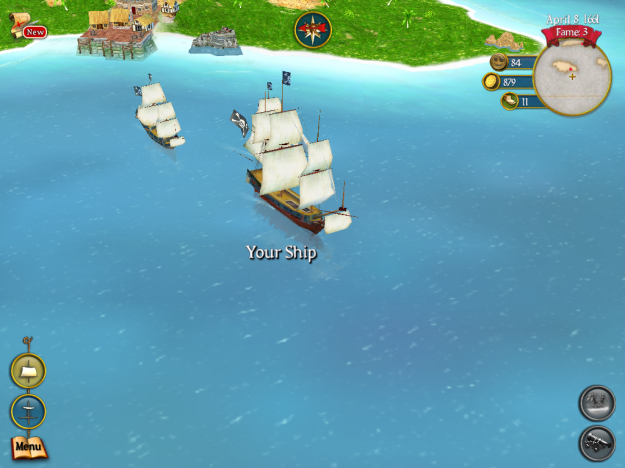 Any game that focuses on pirates needs to capture the most important element of pirate fiction: freedom. If the game comes down to an exercise in staying between the lines and following a clear set of rules in order to ‘win’ – then the developers have failed. Pirate fiction is, above all, a celebration of freedom. Anarchy, mercenarianism, maybe we’ll follow rules, maybe we won’t, maybe we’ll make up new ones that fit the moment: this is the sense of freedom that needs to be captured in a piece of pirate entertainment.

Pirates! hits this freedom on the head about as well as a video game can. The game only gives you enough of a linear structure to move things along and provide a backbone. Much of the rest is up to you. Feel like sailing to Port Royale to seduce the governor’s daughter? Aye, cap’n. Would you prefer to set your compass to San Juan and try to take it by force? Ahoy, matey. Maybe you’re more into getting rich, and you’d rather pillage and sell to the highest bidder? Trade & economics ye be havin’ too, scallywag.

When you attack another ship, you can either try to sink it with your cannons, or you can ram and board it. Weak ships will often surrender, leaving you to help yourself to its loot, crew, and the ship itself. But when an enemy ship resists, that’s when the fun really begins… 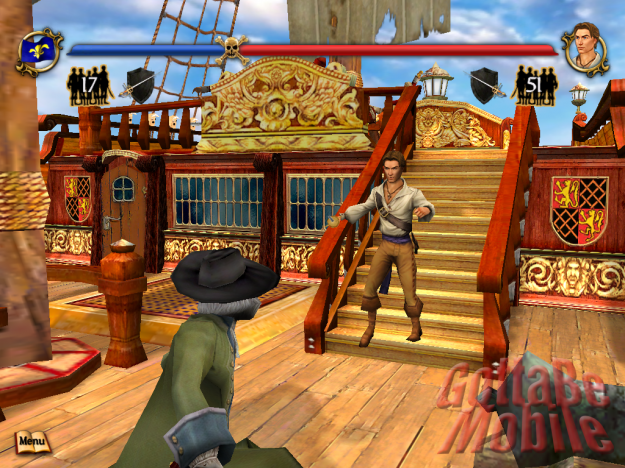 One of the most action-packed elements of the gameplay is when you get to duel another ship’s captain. On boarding a ship that isn’t ready to surrender, you are presented with the choice of which weapon to wield in your duel with the rival captain. You attack your foe with swipes across the screen. The animations during these swashbuckling sequences are as charming as a trip through the original Pirates of the Caribbean ride at Disneyland (minus the animatronics and fog machines).

Structure comes to the game in the form of lists of conquests for you to partake in (there is actually a story that unfolds), as well as your alliances with warring nations. The conquests include wiping out the list of Top Ten Pirates, finding buried treasures, tracking down lost family members, and having your revenge at the throat of the lily-livered cockroach that sold your family into bondage. 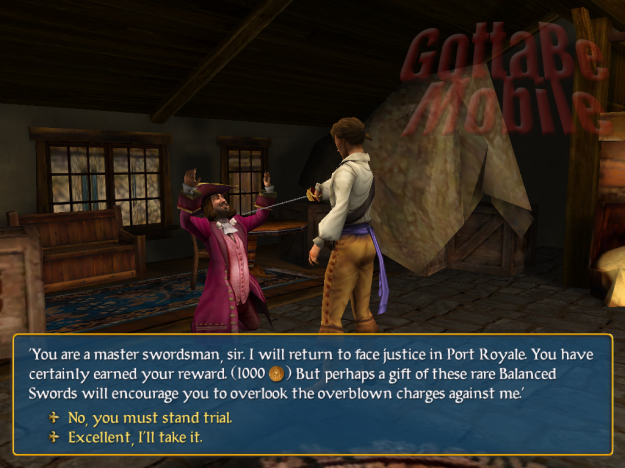 Choice is prevalent in Pirates

The missions are always there, ready for you to tackle when you want. But the key here is that they’re presented in a way that lets you get to them when and how you want to. They aren’t always necessary to follow in any particular order. It achieves a level of freedom in video gaming that rivals sandbox console games like Grand Theft Auto. Some may find the somewhat non-linear gameplay to make for a repetitive experience, but we think it’s an appropriate handling of the genre.

While loyalty to nations can benefit you, the reward and punishment that the game presents to you isn’t black & white. Knowing when to get on which nation’s good side and when to stab them in the back can be just as beneficial. These are the qualities that make it such an enjoyable ode to pirate fiction. A linear action/adventure game like Uncharted or a clear-cut “good guy or bad guy” title like Fable wouldn’t be as fitting a tribute to pirate mythology.

Our biggest criticism is purely cosmetic: your character looks a little too much like Errol Flynn or Orlando Bloom, and not enough like the most interesting over-the-top pirates. Having a customizeable look for your character (as another PC title, Pirates of the Burning Sea had) would have been the icing on the cake to this stellar title. Looking like a typical young hero is fine, but how much more fun would it have been to play as a bombastic sea-dog with a hook and a patch? You see plenty of these pirates in the game, but you’re stuck with the boring one.

Sid Meier’s Pirates! has optimized graphics for the iPad 2, but looks good on the original iPad too. You can head over to the AppStore, where it’ll cost a mere $3.99. As one of the top games on iOS, that’s a deal we wouldn’t be passin’ up if we were in yer boots, matey.