The leaked iPhone 5 back cover is back, and this time it’s on video.

The video comes from supply website ETradeSupply, and it gives us a better look at the possible iPhone 5 part than the first images did. There isn’t any new information about the back cover in the video, unfortunately, though the video does compare it directly to the iPhone 4 to show the size difference. 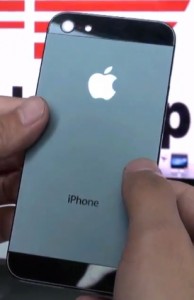 The videographer spends a lot of time showing the ports on the back cover, especially the redesigned bottom that has the headphone jack, smaller dock connector, speaker, and microphone. If this case is true the redesigned port layout might take some time to get used to, but not as much as the larger screen will.

Our videographer also spends some time talking about the SIM card slot. As 9To5Mac points out, the new SIM tray doesn’t mean the iPhone 5 will use the new nano-SIM design. The new tray is simply a bit smaller than the one in the iPhone 4/4S, but still appears to hold the current micro-SIM.

This leaked back cover does look like the iPhone 5 production unit our sources saw recently, but Apple might have a different design that’s more of a secret. No matter what design Apple uses, we expect the iPhone 5 will have a 4-inch display and 4G LTE capability. The phone will likely launch in October or a few months before, and will launch at the same time as iOS 6 which will feature a new Apple-branded Maps app.