Project Shield is NVIDIA’s first attempt at creating its own mobile device, and after a few minutes with the device it seems like an impressive first effort.

Holding the NVIDIA Shield feels a lot like holding a game controller like the Xbox 360 or Dreamcast controller. It’s somewhat large, but still easy to hold, and at under one pound it’s also relatively light.

The Shield can run any Android game, and the controller will work with any device in the TegraZone. The demo units on display had Real Boxing, Rochard and an early version of Hawken for Android installed. All three games played smoothly on the device. Real Boxing and Rochard especially showed the Tegra 4 is capable of producing some fantastic graphics in Android games. 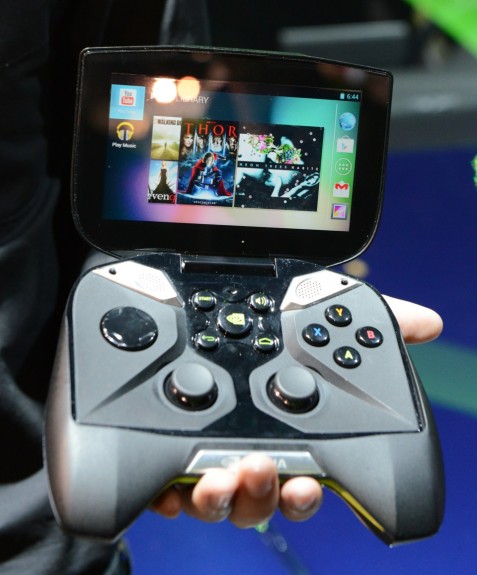 NVIDIA also showed the Shield streaming games from a PC. We played a few minutes of Need For Speed: Most Wanted on the device hooked up to a HDTV. The game looked just as great as it does on the PC on both the 5-inch screen and HDTV, and there was very little discernible lag.

The biggest problem with playing games on the NVIDIA Shield was that it was difficult to focus on just one screen at a time. That’s not a problem when using only the 5-inch screen, or when both displays show the same screen. Games like Real Boxing, however, have a separate spectator mode on the HDTV, so the player has to look at the 5-inch Retinal Display to see their stats and game info.

NVIDIA says it still has to tweak the buttons on the Shield to make them more responsive, but this didn’t seem like an issue for the few minutes we had with the device.

There wasn’t any time to test the pure Android UI on the Project Shield, but after playing games on the screen for a few minutes the device will likely look great when playing movies from the Play Store as well. The speakers were also difficult to test on the show floor, but NVIDIA claims the speakers in the Shield have bass response to rival devices like the Jawbone Jambox.

There are still a few bugs the company needs to work out, specifically when it comes to streaming PC games (one system ran into an infinite loop when opened to stream PC games), but the hardware looks very nice. After just a few minutes we can’t wait to get out hands on the final version. 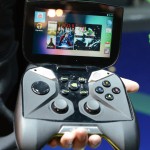 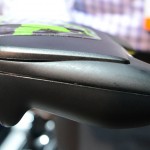 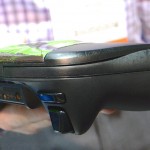