Yesterday marked the end of the second longest customer support issue I have had with a company, almost taking the title from Sony’s car audio division.

As I previously shared, my MacBook Air went crazy earlier this month, displaying a black bar on the display as well as exhibiting some performance quirks.

I dropped it off at the Apple Store at the Easton Town Center in Columbus, OH back on October 8th, with the diagnosis of a new logic board. After returning to pick up the MacBook Air the next day, the same screen issue was clearly visible. Chalk up a wasted trip and a few more days of waiting. Apple put a new display in, but it was defective, so they put in one more. 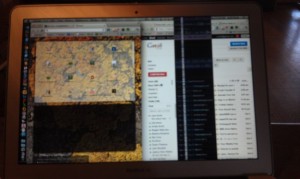 At this point they shipped my notebook back to me, which was a nice touch. Unfortunately, I wasn’t able to actually use the WiFi and the computer wouldn’t sleep when closed.

After talking to the Apple Customer Support number I wasn’t convinced that they would be able to replicate the issue on their end without any type of demo. So, I took it in to the Polaris Apple Store in Columbus. The plan this time around? Reinstall Lion from a clean install. That should fix it, according to the genius.

Move forward to yesterday, when I went down to pick it up. Apparently the Airport card was loose and the antenna was not properly attached. I tested the MacBook Air for a few minutes and all seemed well, until the genius stepped away and the WiFi connection dropped to an unusable crawl.

The head genius took the MacBook Air back to the rear of the store to check some more settings. Things looked to be working in the back, only to have the WiFi not work at all when he brought it out to me to look at. One more test in the back, and even Apple gave up on this problem child.

Finally, after about a month of back and forth, Apple replaced my MacBook Air with the current generation. Now I have a working computer, and for the hassle I get backlit keys, a faster processor and a larger hard drive.

While I am incredibly happy with the resolution, I am not a fan of how long this took to fix. I was lucky enough to have a spare notebook in for review that I could make my primary work machine, but many users don’t have that luxury. This is my work notebook, something I log close to 8 hours on every day. If this was my only computer, nearly a month of downtime would have been nearly impossible to deal with.

So, the good news is that I have a new, working MacBook Air. The bad news is, not all Apple support is equal, and some is on par with the rest of the PC industry.