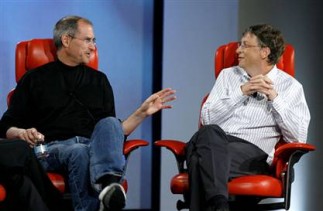 Since Steve Jobs’ passing there has been quite a bit of talk, coverage, reminiscing, reading, eulogizing, demonizing, pedestal constructing, and general chatter about the man, his life, and his accomplishments. Fueled not only by the one thing we’ll all eventually share with the man, death, it has also been fueled by [amazon_link id=”1451648537″ target=”_blank” container=”” container_class=”” ]the Walter Issacson biography[/amazon_link] that was released with Jobs-like marketing timing. While the chatter is on the wane, I don’t expect it to end all that soon.

Maxwell Wessel in the Harvard Business Review has penned an interesting post that I’m sure will keep that chatter going a bit more in the next few days, titled Idolize Bill Gates, Not Steve Jobs. He makes some interesting distinctions between the two and the big one is not about the technological advances that both men were responsible for.

Instead of saying who was the better business man or innovator, he focuses his thesis on how Bill Gates’ philanthropic efforts since leaving Microsoft has set him apart. Wessel argues that in the end, Gates’ efforts on that level are more worthy than his (or Jobs’s) technological achievements.

Another way of putting it is something that my grandfather used to always say: “it’s not about how much money you make, it’s about how well you use your money to make your world a better place.”

Wessel’s piece is certainly food for thought given the stresses and strains going on in the world of business and economic factors these days.