Xbox One and PS4 owners have been able to dive into online role-playing game turned first-person shooter that is Bungie’s Destiny for almost three days, but only users who haven’t yet made their purchase can take advantage of a new Destiny deal that’s surfaced on eBay.

As of right now users can pick up disc-based copies of Destiny for just $49.99. That’s the extent of the deal. There aren’t any gimmicks, no coupon codes that need to be entered and no other necessary purchases that need to be made. The Destiny deal’s eBay page indicates that the games being sent to buyers are used, but no new. It also indicates that over 458 of just the Xbox One version of Destiny have been purchased and sent to users. The PS4 version shows around 300 sold to users. 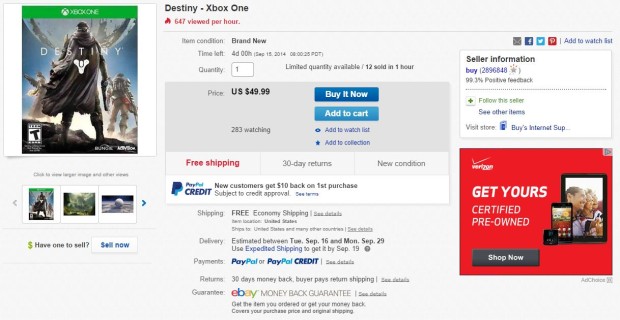 As the regular price of the game is $59.99, users stand to save a bit thanks to this Destiny deal. That is, provided that they’re willing to wait for the game. Unlike traditional online retailers like GameStop or Wal-mart, the eBay selling offering this Destiny deal will ship the game for free, but not overnight.

What that means is that users who want it fast – as in this week – will need to pay extra for faster shipping and dip into the money they saved by not buying the game at full price. Free standard shipping with this Destiny deal will have users playing the game online with their friends around on Wednesday September 17th. Standard shipping, which costs $5.18 extra will get the game to its final destination by September 16th. So too will paying $10.68 for expedited shipping.

User’s who take advantage of this Destiny deal will have to pay sales taxes depending on what state they’re in. The copies of Destiny purchased through this deal are here in the United States but can be shipped outside of the United States to other territories. Interestingly enough, the Destiny deals page indicates that Hawaii and Alaska are excluded from this deal. A 30 day return policy is also offered by the seller – but if the game needs to go back for some reason the buyer will need to pay shipping costs. Users only have the next four days to take advantage of the deal too.

Unfortunately, Xbox 360 and PS3 buyers are being left out of this Destiny deal. There are only two discounted entries for new copies of Destiny. One of those pages is for Microsoft’s Xbox One and the other is for Sony’s PS4 console. As such, users looking to play Destiny and not upgrade their console are still better off looking around the house for games they’ve already played and trading those in to places like GameStop, Best Buy and Wal-Mart.

Announced roughly two years ago and released earlier this week, Destiny is the first game to be developed by Bungie Studios since they went independent and left Microsoft and the Halo franchise behind. Like Halo, Destiny is a first-person shooter. Unlike Halo, Destiny is built around the idea that users can customize their characters and take on missions in an almost open world. The whole game takes place in our Solar System. There are missions to complete on Earth, the Moon, and Mars. Other locations are included in the game’s multiplayer maps. Users can completely customize their character thanks to weapons drops and power-ups. Some missions, called Raids, require users to team up with their friends to complete. In those missions users earn even more weapons and even more power ups. These are in addition to the special powers that users get based on what class of character they choose at the beginning of the game. It all sounds very basic, but already Destiny can claim to be the most successful new game and franchise launch in history.

Destiny for the Xbox One costs $59.99 in stores and through the Xbox Games Store. The PS4 version of the game costs the same, but users who purchase it on Sony’s platforms get exclusive access to some content.