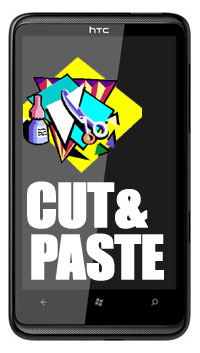 One of the biggest items of concern I have gotten from individuals and that was argued about in closed door settings I have been a part of is cut and paste. When we learned this was not currently included, you would have thought that they left off “phone dialing” or something. I rarely use cut and paste, but I definately saw the future. I saw the complaints about it’s ommision from a mile a way. Remember when Apple didn’t have this funtionality on the iPhone? Yep, people were kicking and screaming. When it finally showed up, the world rejoiced.

Microsoft apparently has heard the screaming early and today, they promised cut and paste in a Q1 2011 update. This is great news as it’s one of the main negatives that Microsoft’s new OS is getting.

PS. Don’t forget to sign up for our contest to win a Windows Phone Messenger bag. Contest ends tonight at 11pm EST.