The HBO Go iPhone and iPad app finally allows subscribers to stream their favorite movies and HBO series to the Apple TV over AirPlay.

Eric Kessler of HBO announced the update today at AllThings D’s D: Dive Into Media conference, and true to his word the latest version of HBO Go arrived this evening with support for AirPlay. There is also an update to Max Go, the Cinemax iPhone and iPad app that adds support for AirPlay.

AirPlay allows HBO Go users to wirelessly play videos from HBO on their HDTV without any wires. The HBO Go version of AirPlay works with iOS 6 and up on the iPhone or iPad and iOS 5.1.1 or higher on the Apple TV. 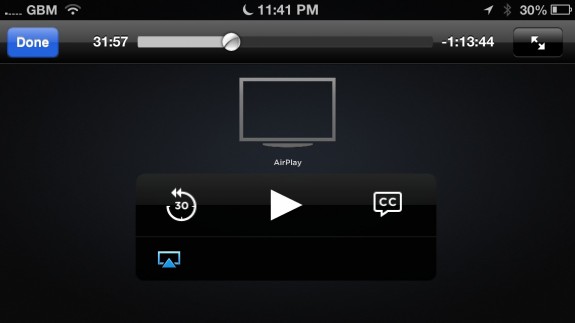 HBO is typically found on cable company On-demand offerings, but the on-demand options don’t offer the full collection of HBO series, comedy specials and movies. With the ability to AirPlay iPad users can now use the Apple TV to watch these shows on a larger screen.

HBO Go is still not available as an Apple TV app, though there are still rumors that Apple will add the HBO Go app to the entertainment device alongside Netflix and Hulu Plus. The service is already on the Xbox and other devices. Kessler told AllThings D that, “We will get on Apple TV, as we’ve said all along.”

The HBO Go app still requires a cable or satellite subscription, something that is not likely to change in the short-term. Though HBO’s arrival on the iPhone, iPad, Apple TV and many other platforms offer a new means of distribution, HBO would need to build the infrastructure to handle subscriptions and to break up with cable operators. In 2012 HBO’s Twitter account confirmed that HBO knows users want to pay HBO directly, but that the financial aspects do not allow the premium channel to cut the cord on cable and join the growing number of cable cutters.