The rumor mill got churning again this morning, this time with reports out of Fudzilla that Motorola is working on a new tablet that will sport 2048 x 1536 resolution. If true, this would be the sharpest tablet screen we have seen yet, and would also serve to reinforce the speculation that Apple could be prepping a “Retina display” iPad for this Fall. 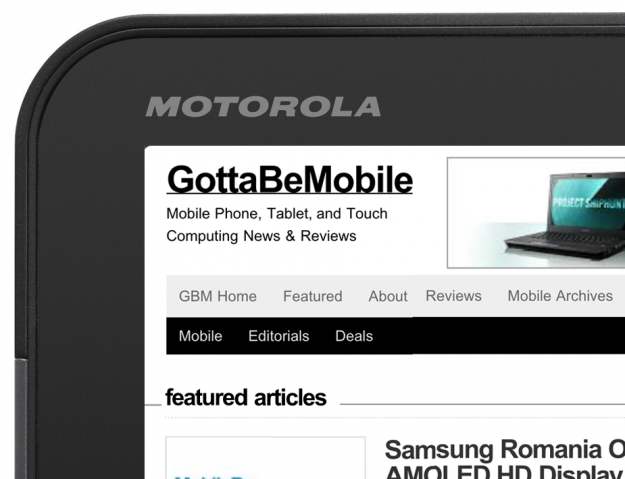 Simulation of "Retina" text on a Motorola tablet

According to the report, the crystal-clear display would be in a 4:3 ratio, doing away with the widescreen format Moto used for the XOOM (with the XOOM’s sales, we see why they would go back to the drawing board).

It’s also said to be thinner than the XOOM and running the upcoming Android “Ice Cream Sandwich,” which will bring phones and tablets together in perfect harmony (Gingerbread and Honeycomb separated the two lines). There was no word on the tab’s processor, but Fudzilla’s source did hint that NVIDIA’s upcoming quad-core Kal El (Tegra 3) chip could be inside. Motorola reportedly has prototypes already and could possibly launch the slate later this year.

Aside from telling us that there may be a beast of a tablet from Motorola this holiday season, this could also be interpreted as a confirmation that Apple’s “iPad HD” or “iPad Pro” is actually coming this Fall.

If Apple’s industry analysts saw the possibility of competing Android tablets having ultra-high-res screens by late 2011, that’s a window of opportunity for Android tablets that Steve Jobs & Co. don’t want to allow. The display is the centerpiece of any touchscreen device, and if your casual customer goes shopping for the holidays and sees a Motorola tablet with 2048 x 1536 resolution next to the iPad 2’s 1024 x 768 screen, Apple could actually lose some business – and their dominant grasp on the tablet market. 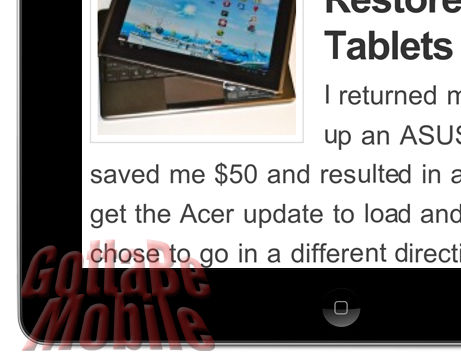 Our simulation shows what text on a "Retina" iPad could look like.

Apple was the first to the market with the incredibly dense display of the iPhone 4, and they want to be the first to introduce the same rich pixel density into a tablet. Waiting for March or April to introduce the iPad 3 could be too late. By then they might actually have some competition. And one thing Apple doesn’t like having is competition (just ask the lawyers of Samsung and HTC).

Of course this rumored display by Motorola would be exactly double the resolution of the iPad. When Apple does upgrade the iPad’s display, that’s exactly the resolution they are expected to use as well. The iPhone 4 made a similar double-jump in pixels from the iPhone 3GS (and all previous iPhones). The reason for a leap to 2x the pixels – rather than a more incremental increase – is to simplify things for developers and guarantee that older apps will still easily scale up.

The term “Retina” is Apple’s marketing buzzword that claims that a display that reaches a certain PPI makes individual pixels indistinguishable to the human eye (retina). With a screen that measures 9.7″ diagonally, this resolution would measure at 264 pixels per inch. The iPhone 4’s PPI is 326 PPI. By Apple’s standards, a pixel-doubled iPad 2 wouldn’t qualify as “Retina,” but Apple’s smooth talkers could say it is “Retina” because a large tablet screen is usually held farther away from the eyes than a phone. Despite the rhetoric, we would have to agree that it will look phenomenal.

The cost of one of these tablets could be another matter altogether. With Apple setting a precedent of a $500 starting price for the iPad, that pattern could very well be changing with this HD version.

If Motorola is packing this cutting-edge display in a thin piece of hardware – with a quad-core Tegra 3 chip inside – they couldn’t likely sell it for $500 and make a sufficient profit (at least not right now). This tablet could very well sell for $700-800 for a WiFi-only model.

The same would go for Apple’s Retina iPad. As we speculated earlier, they may not be able to sell iPads with that many pixels at $500 for another couple of years. That could very well be why we’re hearing “iPad Pro” (i.e. – “iPad More Expensive”) instead of simply iPad 3.

Of course, once again, we are analyzing a myriad of possibilities based on one rumor that one blog claims to have been told by inside sources. We will certainly see “Retina” tablets within the next year or so – and they will be a sight to behold when we do. If that comes sooner than later, expect to see an explosion of tablet sales this holiday season that will trump anything we saw last year.