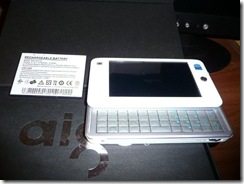 GBM reader Hector Gomez has his hands on the Aigo P8860 MID and has sent us some pictures to pass on. In his early hands on he reports that battery life is 2 hours and 50 minutes with WiFi and BlueTooth on. His device came with two batteries. Here’s the rest of his early report:

For now I can say that the battery lasted 2 hrs 50 mins with Wi-Fi and Bluetooth on, so if I get at least 2.5 hrs with the two batteries then I can get at least 5 hrs. Went to several websites, opened the Office suite, played videos from websites, played some music, also had a link to PPLive and played those videos. It came with two batteries; don’t know if it suppose to have two batteries there was no instructions. I paired my BT Logitech Mouse and worked great, going to try and pair a BT keyboard. I was trying to setup a BT DUN with my Blackberry but no luck, it pairs but doesn’t connect. I will have to research this and see what I can find out. It also came with a 2GB microSD card with it. Hopefully I can get Windows XP installed on it, I have seen one with Windows but it also showed most of the drivers weren’t working.