In the wake  of their controversial  app- and ebook-pulling activity, Apple and Amazon, respectively, are facing legal repercussions. 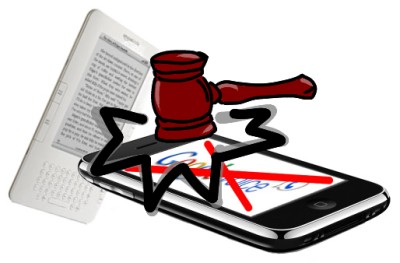 First up today was Amazon (via Ars Technica). In a lawsuit, plaintiffs are hitting them for not living up to their agreement granting customers  the ability  to “keep a permanent copy of the applicable Digital Content and to view, use, and display such Digital Content an unlimited number of times.”  One of the plaintiffs has extra reason to sue: Amazon pulled the rug out from under his homework. He still has the notes he made on his Kindle copy of “1984” but without the underlying text, those notes are metadata without data, annotations on top of empty pages. In other words, pretty useless.

Later, it was revealed that the Federal Communications Commission (FCC) is investigating Apple’s ban on Google Voice apps (via The Wall Street Journal by way of Gizmodo).

In letters sent late Friday to the two companies and AT&T Inc., the FCC asked why Apple rejected the Google Voice application for the iPhone and removed related applications from its App Store. The letter also seeks information on how AT&T, the exclusive U.S. iPhone carrier, was consulted in the decision, if at all.

It’s part of  the larger  investigation into  the effects of exclusive deals, like AT&T’s deal on  the iPhone, on competition and on  the  smaller carriers. No telling what may come of either of these legal maneuvers, but it certainly sends a message that  shenanigans like these will not  fade without consequences.