About a week ago, AT&T announced their intent to increase their 3G speeds via HSPA+, potentially boosting it to up to 14.4Mbps. That’s all well and good, really. But I have to wonder, AT&T, if your 3G speeds can get that high, why do your Wi-Fi speeds seem so low?

While I don’t regularly set up an office in Starbucks like some people, I am there often enough to use the Wi-Fi now and then, which is included with my iPhone data plan. Primarily I’m checking email or looking up someplace on a map, nothing too intense, but enough to notice there wasn’t much benefit over using 3G, which is especially perplexing because I’m still using the slower iPhone 3G, not the 3GS. I finally decided to do a speedtest and confirm it wasn’t just my imagination. 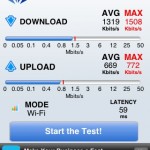 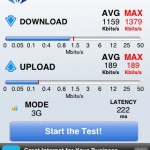 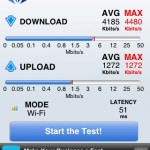 Sure enough, while the upload speed at the hotspot was considerably better, the download speed, around 1.3Mbps, was barely above the 3G sample I took later, around 1.1Mbps. While this is hardly an exhaustive test of the area hotspots, the 3G test is in line with others I’ve taken, as is the sample of my home broadband, which is a lower tier Comcast offering, at around 4.1Mbps. If I was using a top tier service, the difference would be even more dramatic.

Obviously a busy day in Starbucks with plenty of folks taxing the hotspot would lead to slower speeds, but this was 11:18am on Saturday. Hardly primetime and there wasn’t even a line to get my drink. If I had a 3GS or other smartphone with faster 3G performance, I doubt it would be worth my time to use the hotspot at all (keeping in mind, their 3G network works pretty well for me). AT&T, while I appreciate the added value of hotspot access, for me, there isn’t much value being added. Anyone else with low (or high) AT&T Wi-Fi hotspot speeds to report?