Back in the Pocket PC and Windows Phone days, there were a handful of apps that allowed us to take screenshots. What I found best was using SOTI Pocket Controller though. It allowed an easy and fast way to do screenshots for my reviews. Shortly after Windows Phone was released in 2010, I asked a contact of mine at SOTI and he explained why they weren’t making a version for Windows Phone. 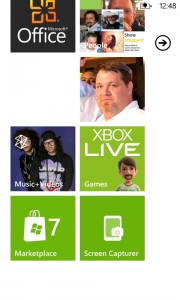 Back in 2010, I was among 30 or so invited to Microsoft’s campus to spend a day with Windows Phone a couple of months before launch. Screen shot ability or the lack thereof was among the things I brought up in our sessions. I had been using the iPhone on/off for a year at this point and if you used to follow me on Twitter, I tweeted all sorts of interesting screen shots because iOS makes it so damn easy. I mentioned in these sessions that this is going to be something that Microsoft needs to have at launch. My points were noted, I guess.

I did a series of posts on GottaBeMobile about using Windows Phone again late 2011. I got my hands on the HTC Titan and proceeded to set it up. I had forgotten all about the lack of screenshots. When I figured it out again, I was disappointed again. I posted on GBM about unlocking your Windows Phone using ChevronWP7. The main reason I unlocked my Titan was to be able to use a 3rd party app that gives the ability to take screenshots. It’s kind of weird to use, but it works. I can now provide friends and readers quality screenshots after going through hoops. Most Windows Phone users aren’t going to want to go through that hassle.

I have a very talented friend that wants to be able to do guides and reviews of Windows Phone software, but she can’t get screen shots to accompany her content. She thinks that taking a photograph of the phone to get the screen captured is tacky and too much of a hassle. She bought a token to unlock her Windows Phone, but she doesn’t have any machines with Windows 7 to be able to run it. My friend can’t take screenies.

Because of this, this very awesome, talented writer isn’t contributing content that would really help the Windows Phone Community. I am probably more disappointed in this than she is.

Jean-Louis Gassée posted a really good read about Nokia’s comeback over on Monday Note. This quote speaks directly to this topic…

I encounter my first problem when looking for ways to take screenshots for today’s note. The documentation is mute on the subject, and all Google can offer is that I need software developer tools. Is there really nothing for normal humans? I email my friends, I tweet nokia-connects (as recommended in a nice handwritten note that came with the phone)…still nothing. A simple two-button procedure, followed by a no-hands Photo Stream upload – in other words, the iPhone method — seems to be the type of solution to aspire to.

Have you ever wondered why there are 14,000 iPhone/iPod Touch app review sites out there? Well, iOS is still wildly popular, but on another level… IT IS EXTREMELY EASY TO WRITE AN iPHONE APP REVIEW BECAUSE SCREENSHOTS ARE A BREEZE!

Android used to be a bear too, but OEMs started offering ways to let users get the screen shots they want.

I am begging you Microsoft, please get this into a release soon. Hurry up and rush it into Tango? Yep, I know… not gonna happen, but here’s to hope.