Validity is working to bring fingerprint scanning to smartphones for better security and an easier unlock process according to Laptop Mag.

At CES, Validity showed off a small fingerprint reader that it built into a specially modified older Samsung smartphone. The implementation put the reader under the glass of phone, directly under the capacitive buttons below the screen. The reader is impossible to see, which is why Validity included a white line and a graphic on the lock screen to indicate its location.

Phones with fingerprint readers are theoretically more secure, assuming the readers work correctly. It’s much harder to copy a person’s fingerprint than it is to break the code of a four digit PIN or a pattern unlock.

Fingerprint scanning can help smartphones users because of the amount of data stored on smartphones. Phones carry a person’s email, social network accounts, contact lists, photos and much more. Users don’t want that data falling into the hands of anyone who touches their phone.

Validity didn’t discuss any companies that it’s working with, but it did show that it can incorporate fingerprint readers into almost any physical button. As Google tries to push Android to virtual buttons the technology may fall behind. 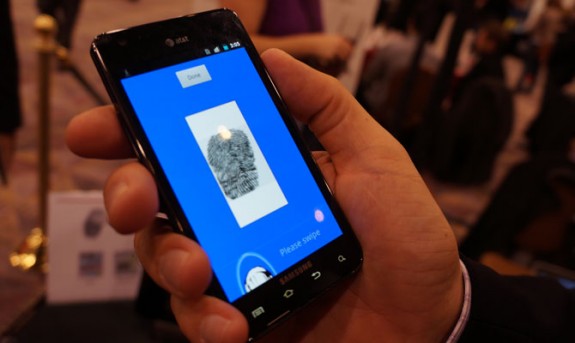 Samsung, the biggest smartphone manufacturer in the world, still uses physical home buttons on its smartphones. The company could choose to incorporate technology like Validity’s in a future Galaxy smartphone.

The last major smartphone to include a fingerprint reader was the first Motorola Atrix on AT&T. The reader didn’t work very well, but that phone came out two years ago, which should mean fingerprint scanning technology is better now.