Apple isn’t sharing every iOS 7 feature yet, and it looks like the company may be hiding a feature that dramatically improves dictation and possibly improves Siri.

Apple switched up the Voice Dictation Screen in iOS 7, but in the current form it doesn’t show what the user is saying until they tap done. A new discovery shows that Apple could be bringing dictation offline which would speed it up and which could make it more accurate and easier to use.

The speed from offline dictation would allow Apple to show users the result of dictation as they go, rather than at the end of a sentence or paragraph. This is especially important because once one mistake is made in dictation, the rest of the message can go quickly off base. The video below shows how offline dictation works on Android, and how it could work on iOS 7.

Hamza Snood shares code from the iOS 7 beta with 9to5Mac that shows Apple is at least laying the groundwork for offline dictation, a feature that could spill over to Siri.

9to5Mac reports that while developers using the iOS 7 beta cannot use the local dictation feature, it is in use on internal builds on the Apple campus. The setting is optional, so current users can choose to use offline dictation or cloud based dictation.

Apple will offer live feedback for offline dictation on the Mac, with a hefty download, in OS X Mavericks which arrives later this year. Like in the Android demo shown above, this greatly increases the usability of dictation on OS X because the words change as the user speaks. This allows for instant corrections and a more fluid dictation experience. 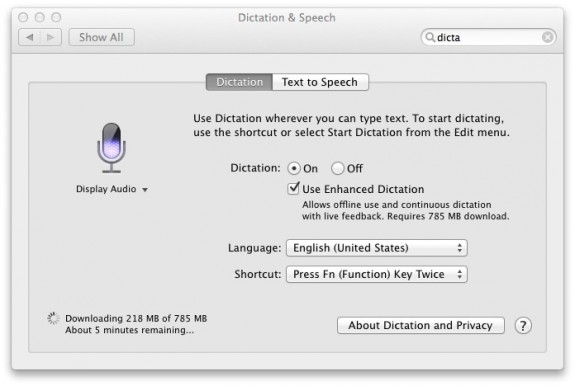 In iOS 7 we could see offline dictation, or as it is known in OS X Mavericks Enhanced Dictation, which would offer live feedback for words.

The report suggests this feature could also come to Siri, performing certain queries locally, for a faster and more accurate result. This would require a more power, which could give Apple a reason to make offline dictation and Siri access an iPhone 5S exclusive. Apple has a history of adding voice features to the “S” iPhone releases.

Apple could still change this hidden feature before the iOS 7 release this fall, pulling it from a final build until it is ready for daily use, or we could see it arrive in beta like Siri.