If you are looking to buy an iPad mini or iPad 4 Best Buy offers a collection of hidden iPad deals that vary from store to store.

Last night while browsing at a Best Buy in Ohio, we discovered a mix of open box iPad mini deals and open box iPad 4 deals that offer up to $50 off the retail price of an iPad.

What these deals do offers is same day pickup if a Best Buy near you has open box iPad deals, and no waiting for a refurbished iPad mini to come into stock.

These open box iPad 4 deals promise no damage and all the accessories an iPad normally comes with. Users also get the standard one-year Apple warranty for the iPad. 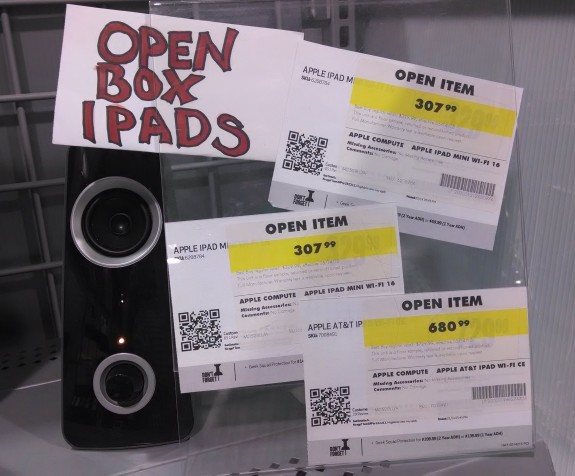 The Best Buy in Findlay, OH posted the following iPad mini and iPad 4 deals on open box items hidden in the corner of a tablet aisle next to a used monitor, a Nook and a Kindle. Some Best Buy locations may post similar deals on a board at the front of the store or near the iPad endcaps.

The following iPad mini and iPad 4 deals were available;

These deals will vary from store to store, and shoppers can score bigger savings on the iPad 4 and iPad mini buying a refurbished iPad directly from Apple, if the device they want is in stock. 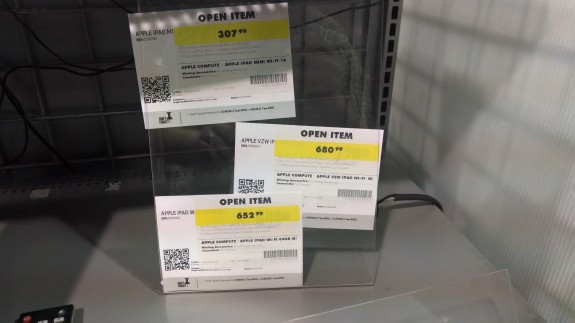 Best Buy hid these iPad deals under a shelf holding an old monitor.

Rumors suggest Apple is working on the iPad 5 and iPad mini 2 for an October event, which could include a iPad 5 release date by the end of that month. The iPad 5 will reportedly arrive with a thinner and lighter design that mirrors the look of the iPad mini.

The iPad mini 2 release date could come in November, or may be pushed to 2014, according to separate rumors. It’s not clear if the iPad mini 2 will gain a Retina Display. There is also talk of a cheaper iPad mini model this fall.