Update: Apple removed the app from the app store, users who downloaded it can continue to use HiddenApps, but it is not possible to download it from Apple anymore.

HiddenApps is a fairly straightforward app that doesn’t explain itself well, but does actually work. The app lets iPhone and iPad users hide official Apple apps they may not want to use such as Newsstand, Stocks, Compass and Voice Memos.

To hide those apps, HiddenApps will try to install an app called “Poof” in place of the app the user wants to hide. The Poof app won’t download, but it doesn’t have to in order to work. To hide the Apple app users have to delete the Poof app as they would delete and other app, press and hold on any app, then hit the black “x” in the top left corner of the app. 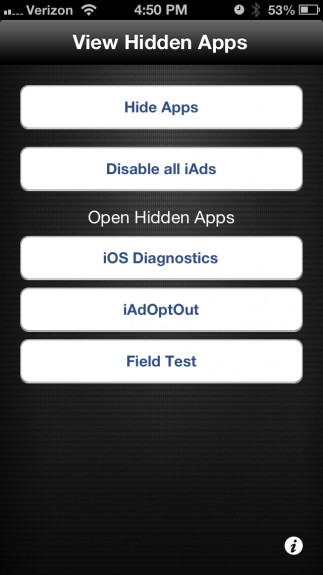 After deleting the Poof app, the Apple app will disappear from the iPhone, iPad or iPod touch. The app will completely disappear from the device, and won’t even show up in spotlight search. To get the app back on the iOS device, users just have to restart their device, or “respring” if they have a jailbroken device.

Note that after restarting or respringing, the app won’t appear in the same spot it did before. It will instead appear on a free space in a homescreen or in the folder it was first in when the device shipped.

That means apps like Voice Memos and Stocks will reappear in the Utilities folder, even if the user moved them to another folder. If the user’s Utilities folder is otherwise full, it will make one the last app in the folder disappear. Another restart or respring will bring that app back onto a homescreen.

The app also lets users hide all iAds, which will also come back after a restart.

HiddenApps is available for free in the iOS App Store, but Apple will likely pull it down very soon. Interested users should try to download it as soon as possible before that happens.