Apple made a big deal about the iPad in education when they kicked off the year with iTunes U and a major eTextbook initiative. The push, is to get iPads into classrooms and take a cut of textbook sales, but it looks like Apple may have to settle for the hardware cut — at least one school is kicking textbooks completely to the curb.

While impressed by the venture, many of us questioned the ability of schools to buy iPads for every student. According to Apple over 600 districts have purchased iPads, including Burlington High School in Boston which spent $500,000 on the one-to-one iPad program. 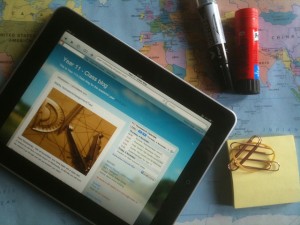 Why you ask? Didn’t Apple promise affordable textbooks for the iPad? Well, According to Larkin, eTextbooks cost the school more in the long run, so the school has tossed books to the curb in favor of using the Internet as a resource.

As a professor and an adult, I can definitely say that this is incredibly cool. There is a massive amount of information that students can use and learn from. Even better, by teaching children how to find answers to questions using the Internet, the high school is teaching an essential life skill that many college students and new employees don’t have.

Teachers were concerned about the program, but have dealt with the distraction issue by keeping control of the classroom and turning off iPads when the students become distracted by messages or games.

Students weigh in on the iPad in this video shown below.

It shouldn’t surprise you that students find the iPad useful for many of the same reasons that businesses do;

Students are using apps like Evernote, Dropbox, InClass, iBooks and Notarize to stay on top of class and activities.

I would have loved an iPad with Evernote, Dropbox and other apps while I was in high school.

What do you think about this trend?