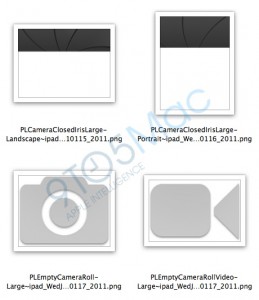 Whether it’s digging through new software releases or drilling component makers for info, you can always count on the Apple rumor mill to keep on milling. Whether anything accurate drops out of it is a whole other issue, but there’s always something. Today’s rumor drop focuses on hardware upgrades for iPhone and iPad.

Over at 9to5 Mac, they’ve discovered images in the iOS 4.3 beta that indicate photo and video capabilities for the iPad. The images show 1024×768 shutter and icon images designed for the iPad. Nothing too surprising here, nor does it confirm the hardware will make it to the final device, but clearly that’s the expectation.

Meanwhile Slashgear is reporting that Qualcomm is providing the baseband chip for the next iPhone, while Taiwanese supplier Kinsus is providing a new “A8” processor (via Digitimes and Apple Daily). The nature of this new processor is unclear. While Apple refers to their system-on-a-chip as A4, the CPU in that system is ARM Cortex-A8. It could be that Kinsus is supplying the Cortex-A8 CPU or that the follow-up to A4 will be A8, implying a doubling of some sort. Expect that to be speculated to death in the weeks ahead. For the record, I’m guessing the former.