Cell phones have come a long way since the first Motorola Dynatac hit the streets in 1982, eventually making its way to Zac Morris’ backpack, to the iPhone 4S and the Galaxy Nexus.

Back in 1982, mobility was loosely defined as weighing 2 pounds, being a foot long and a battery capable of 1 hour of talk time. This might sound like the HTC ThunderBolt from March, but it’s really the Dynatac. Shortly after came bag phones like the one I saw a friend’s mom use while growing up, this phones literally was in a bag the size of a purse and looked about as cool. I’m sure we ran up quite the bill calling in requests to the local radio station when she wasn’t looking.

Speaking of costs, the Motorola Dynatac retailed for $3,995 back in 1982. Since then we have seen the cost of mobile phones and service shrink. 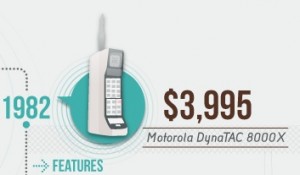 As you can see in the history of cellphones infographic below, it took a decade before the price dropped below $1,000 and we saw the first real integration of smartphone like features such as a calculator, pager and email. In the late 90’s we see the Nokia 6160, which is the first phone I owned and the first phone many users owned.

Flash forward another year and we get the Nokia 7110, which was lusted after by many geeks who saw it used in The Matrix. This $500 phone was the first to bring mobile web browsing to the market.

Once 2001 rolled around we saw the introduction of PDAs, BlackBerries and camera phones. By 2005 we had the Motorola Rokr, which was the first to sync up to iTunes. Ultimately the 100 song limit was the undoing of this $350 phones.

In 2007, the iPhone arrived with a cost of $395, followed shortly after by the HTC Dream, or G1, which brought Android to the market and kicked off the current smartphone battle that brings us better and better phones. Prices have finally dropped to $300 and $200 for high end phones.

The phone of the future, as shown in the infographic, has most of the features of the Galaxy Nexus, especially paired with the Onlive gaming service and the hacked Google Wallet app. Though long battery life is still a missing factor for most high end devices I share the hope that smartphones will be able to last days by 2020.

As you look through this infographic from Savings.com, do you see any phones you owned?