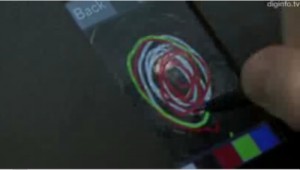 A projected capacitive touchscreen from Hitachi, previously named as a potential iPhone upgrade, sneaked out on a YouTube video from DigInfo. It demonstrates stylus input and contact through gloves, as well as multi-touch input. However, I don’t peg it as being an option for iPhone.

In the demo (below) and other photos of the component, the screen overlay appears to be a thin layer of plastic. For a resistive touchscreen to work, the screen needs to offer a little bit of flex, i.e., resistance, be it on a hardened, rugged Tablet PC, the touchscreen in my Toyota Prius, or my old IPAQ Pocket PC. The iPhone, on the other hand, uses a solid plate of hard glass. It is not intended to bend, at least not without breaking. Other toughened screens, particularly Gorilla Glass, flex quite well and could benefit from these new digitizers.

Edit: Scratch that. It’s not resistive, but projected capacitive. Basically, it’s capacitive that can detect non-conductive contact. Doesn’t measure contact by pressure and should work through glass.

The precision of the stylus input is a far cry from that of an active digitizer, but certainly on par with many other resistive digitizers. While Warner is finding better and better capacitive stylus solutions, generally, capacitive still lags behind on stylus input. Regardless, the ability to work through gloves is a strong advantage. Look forward to seeing these on Android devices and Windows Phones.