Microsoft, makers of the Xbox One, Windows and Microsoft Office, has a spectacular deal for users who used all or some of its online services. The company’s online store is selling a digital bundle that packs in, Xbox Live Gold, OneDrive and Microsoft Office 365 all for one low price. 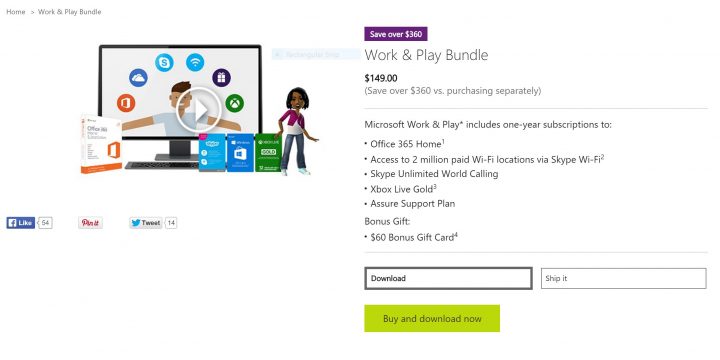 The $129 Holiday 2015 Microsoft Work & Play bundle isn’t any different in that respect. It still consists of access to Microsoft’s most popular web services. For $149 users get a year of Office 365 Home, complete with the extra OneDrive cloud storage that this subscription entails. Office 365 Home lets users unlock Microsoft’s Word, Excel, OneNote and PowerPoint mobile apps on devices with screens bigger than 10 inches and includes the traditional Desktop version of each Office app for up to four different users at home. Normally, this subscription costs $9.99 a month or $99.99 a year.

When Microsoft acquired Skype, it snagged its own worldwide calling and Wi-Fi service. Holiday 2015 Microsoft Work & Play buyers get unlimited calling with Skype — even to landline and mobile phones – for an entire year. Without a subscription, only calling other Skype accounts is free. Skype Wi-Fi lets users connect with thousands of different Wi-Fi hotspots across the country.

Skype subscriptions for the U.S. and Canada cost $2.99 a month. Unlimited calling worldwide costs $13.99 a month.

Included with the Holiday 2015 Microsoft Work & Play bundle is also an Xbox Live Gold subscription. In years past, Xbox Live Gold was a requirement to play games on the Xbox One and Xbox 360 online and access any of the platform’s entertainment apps. It’s still the only way to play multiplayer, but Microsoft is also letting users download games from its digital library each month at no extra charge. A subscription to Xbox Live Gold costs $9.99 a month or $59.99 a year.

Microsoft will provide buyers with phone and internet support for their PC too – something Microsoft Work & Play Bundles haven’t offered in the past. The company calls this an Assure Plan, and it covers lessons on Windows and Office.

The bundle also gives Windows Store shopping a boost, with $60 in credit to use on music, apps, games and video.

All told, the Holiday 2015 Microsoft Work & Play Bundle could be a great deal for users who rely on one or more of Microsoft’s services. It’s certainly a very easy way to get into Office 365, which is the cheapest way to get the company’s productivity apps without having to pay their somewhat lofty cover charge they require otherwise. Skype Wi-Fi seems a bit strange to include, seeing as how it’s not really exciting for anyone that doesn’t have more than a few Skype Wi-Fi locations around them. Microsoft says that if purchased on their own, each of the subscriptions in this pack would cost $360.

Microsoft is offering the huge savings in the bundle to put a spotlight on its many consumer oriented services – particularly the ones people aren’t familiar with. Office 365 is growing, but still relatively new. Xbox Live is how the company plans to measure the success of its gaming efforts going forward. The credit for the Windows Store is so that Microsoft can highlight the kinds of things that it sells in its own store. Included in Windows 10 and online, the Windows Store is modeled after Apple’s iTunes Store. Windows 10 is free right now because the company is hoping to build out a base of subscribers for its services and add millions of shoppers to the Windows Store.

Microsoft plans to stop selling the Holiday 2015 Work & Play Bundle online on January 10th. Shoppers who purchase the digital bundle will get does from the Microsoft Store to redeem each of their subscriptions.