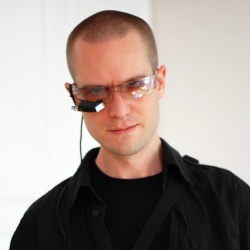 Been a while since we’ve seen a good wearable computing rig, and I have to say, Martin Magnusson of Sweden manages pulls it off while still looking extremely badass and without shame for what others might think, as he has called his project “Becoming Cyborg”.

Martin initially attempted to build his wearable system using his iPhone as the main computer, but this didn’t take, so he took a different approach. His new system is built from bare bones using a BeagleBoard single-board computer running Angstrom Linux from an SD card. For video output, he uses Myvu Crystal video glasses converted to a single display connected via S-video. A battery pack of 4 AA batteries powers the system. A Bluetooth module connects it to his foldable Nokia SU-8W keyboard and allows Internet connectivity via tethering to his iPhone. I’m not sure exactly what he’s seeing on his display, but I’ll imagine it’s kind of like what Tony Stark sees when he’s flying around as Iron Man. 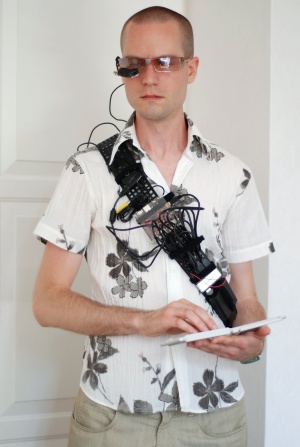 Initially, he had the components openly attached to a strap worn over his shoulder. He has since moved them inside an old CD zipper case for protection and discretion.

Lot of intricate work and skill put into this rig. Keeping it sealed away takes away a bit from the coolness for me, while the open system does make him look a bit like Kickpuncher (and not the Donald “shoulda been Spider-Man” Glover version). Perhaps having them in sealed modules on the strap would be a happy middle ground. Regardless, kudos to Martin for his top-notch work. Check out his blog for more details.