Auto-maker Honda is bringing a more connected experience to its 2014 Civic thanks to the introduction of new features, such as integration of Apple’s Siri Eyes Free as well as Nokia’s HERE connected maps. The technologies are appearing as Honday Display Audio and HondaLink inside the cars, and the automaker says that “together these technologies represent the most advanced information and media connectivity package ever offered by Honda.”

With Honda Display Audio, Siri Eyes Free will be coming to the car complete with controls for Siri mounted on the steering wheel when a compatible iPhone (iPhone 4S model or later) is paired to the 2014 Civic via Bluetooth. 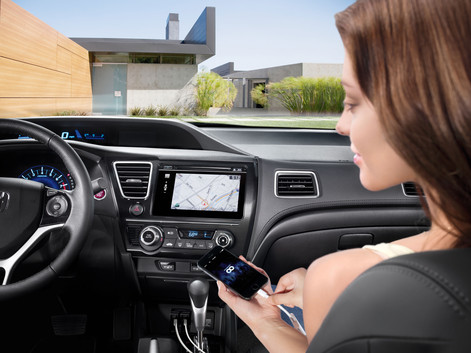 Additionally, Honda will be equipping its cars with a 7-inch high definition capacitive touchscreen as well, featuring similar gestures such as swiping and pinching to zoom as on the smartphone.

Icons resembling smartphone apps are displayed on a 7-inch, high-definition, capacitive touchscreen, making the interface intuitive and easy to use. Standard internet-sourced music and media options, such as Pandora® are built into the Display Audio interface, with the ability to create personalized stations, tap to “like” songs, and view album artwork directly from the touchscreen. Display Audio also integrates touch operation of the volume (with a quick-swipe adjustment), menu, and return functions for a modern and sleek look. Standard steering wheel controls compliment the touchscreen features as well.

HondaLink s an application that pairs an iPhone 5s, iPhone 5c, or iPhone 5 with the infotainment system to provide for a more connected experience, which includes Nokia’s connected HERE navigation service, complete with turn-by-turn navigation instructions. Essentially, the $60 app will allow HERE maps to be sent to the car’s 7-inch touchscreen unit so you can see everything on the larger display, rather than on your phone’s more compact screen. 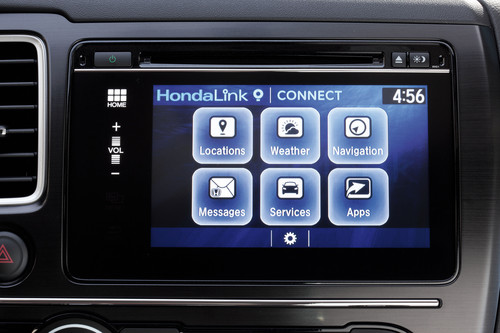