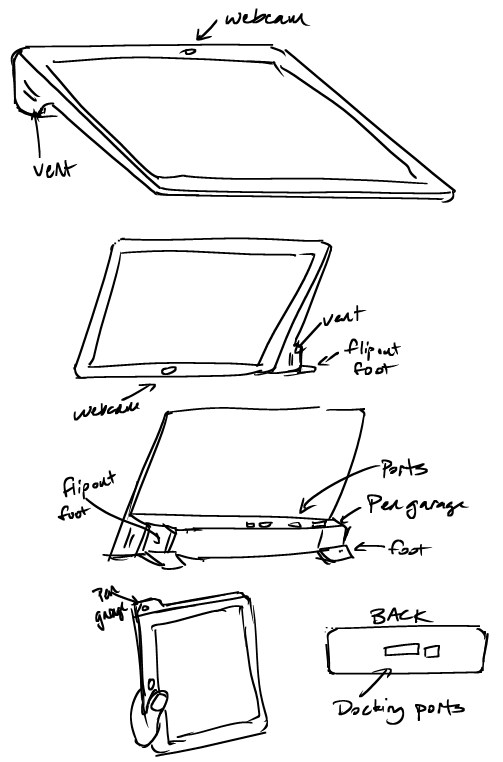 So all this noise about the Apple Tablet and what it will or will not do got me thinking about tablet design, specifically slate design other than a basic flat screen. I’ve been using slates or convertibles in slate mode for years (longer than there have been Apple tablet rumors, apparently), so believe me when I state I say this with love – standard flat slate design sucks.

Grabbing a slate with one hand requires a clamp-like scissor grip as opposed to a more natural rounded grip. On a table top, it lies flat when an angle is better for working or viewing. I’ve dealt with these drawbacks using stands and grips, but those kludges only accentuate how ill-suited the traditional flat design is for productivity. Thus, I propose a design shift away from flat and toward L-shaped wedge.

The wedge epiphany came to me after handling the jetBook lite with its protruding battery pack. Allowed me to get a really good, natural grip on the device at its heaviest spot. Excellent for handling, not simply holding, with one hand.

Expanding that design to a Tablet PC, the guts of the machine (processor, storage, battery, etc.) would be crammed into the back end instead of being distributed across the entire footprint. The various ports would also be located here, along with a pair of flip-out feet, offering a steeper angle when laid horizontally and stability when stood vertically. I also envision a webcam on the bezel here, angled to capture a user sitting a few feet away.

Held in two hands, the thick end would be at the top with fingers held below it. Top heavy in this orientation, but that’s okay because it’s being controlled with two hands. An on-screen thumb board would be split and positioned near the top for access. A more traditional keyboard can be opened at the thin bottom end for typing at a desk. One-handed entry in portrait mode will be via a small thumb board in the lower corner or via pen used with the other hand. It will also allow wired or wireless keyboard and mouse input with or without a docking system.

This design assumes touch and active pen input, as well as a processor powerful enough to require air cooling. I doubt we’ll see the latter two in the upcoming Apple Tablet, but they could certainly surprise us with a dual boot system running Mac OS X in “docked” mode. (For the record, that sketch and almost all these words were crafted by pen.)

Regardless, Apple needs to deliver something tomorrow other than the same flat slate that’s been around for years. They’ll likely do this with software and/or under the hood hardware, but I think they can definitely do better than the uniform flat slate design that has failed to take off for years. I wouldn’t mind seeing this design from anyone else either. Just be sure to send me one (preferably more).