HopTo: A Microsoft Office Alternative for the iPad

Apparently there are legions of folks out there who are waiting with eager anticipation for Microsoft Office to arrive on the iPad. Apparently some folks at Microsoft are too. Outgoing Microsoft Steve Ballmer even seems a bit frustrated saying that Office will arrive on the iPad when there is a touch first version available. I for one don’t understand what all the angst is about as there are several alternatives that allow users who store documents in the Cloud to work with existing Microsoft Office documents and create new ones. As far as I’m concerned, Microsoft’s hesitation is Microsoft’s loss. Of course the day Microsoft finally does release an Office version for the iPad I’m sure most of the world will react as if the sky has parted and some sort of Holy Grail has just been given to us all. 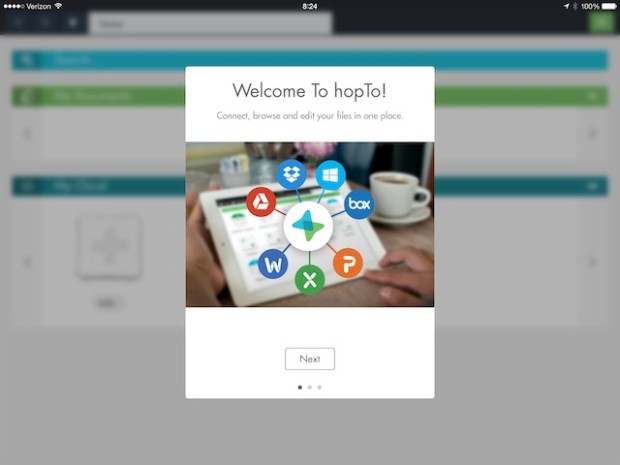 But, while we wait for the skies to part, there are some very suitable alternatives. Recently a new one joined the list called HopTo. While HopTo won’t let you edit Powerpoint files just yet, Word and Excel junkies can have a field day.

HopTo feels very much like an iOS App in its visual design. For some, that actually might be a turn off because there is a childish sensibility about it. But once you accept the design aesthetic you can see some smart thinking went into the development of HopTo. You create an account with HopTo and then you hook into either Dropbox, Box, Google Drive, or connect up to your Windows PC. The latter requires installing a small program on your Windows PC. 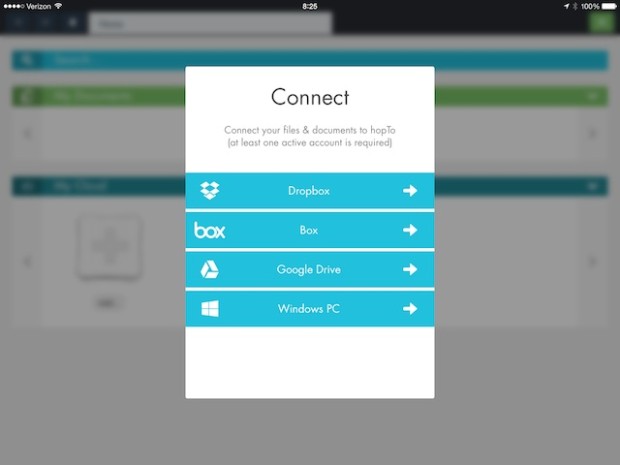 You can’t use Microsoft’s Skydrive yet and that might be a downer for Office aficionados who work with that Cloud platform.

Everything is touch centric. Once you’re connected you are presented with a tabbed interface with three sliding rows or panels: Recent Files, My Documents, and My Cloud. Recent Files are files you’ve worked with on your iPad. My Documents contains documents from across the services you’ve connected to in an almost source agnostic way. 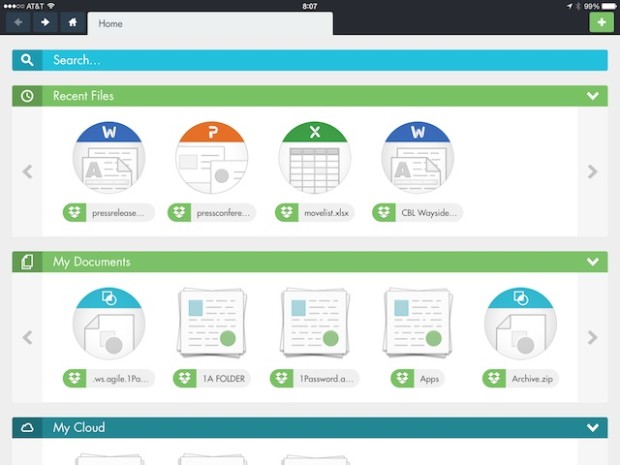 My Cloud gives you one touch access to the services you’ve connected to. The source agnostic approach is carried over to the Search function as Hopto will search for your file across all sources. In essence HopTo is providing you with a file manager of sorts for your documents. A long tap on a document icon and a radial menu pops up that allows you to delete, email, share via the iOS share sheet, or open the document in another tab. 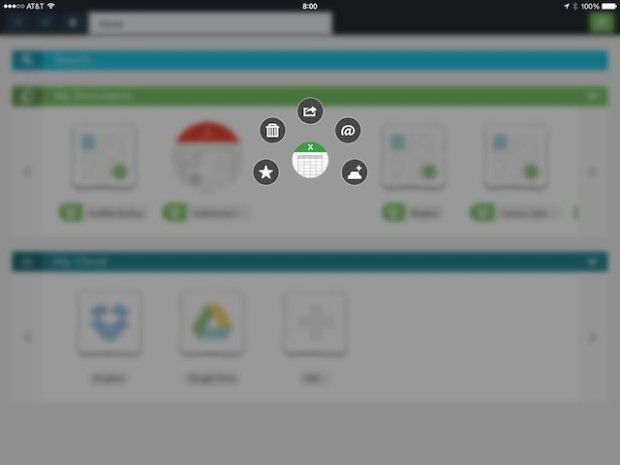 On the main screen, icons tell you which source contains the document you’re looking at as well as document type. If you have pictures within your file structure you see a thumbnail of those. You slide the panels left and right to view your documents. If you’ve got a lot of documents it can take you quite a few swipes to view them all, so the Search function is a key if you know the file name. Pressing on a document icon loads it into HopTo and then you can begin editing. 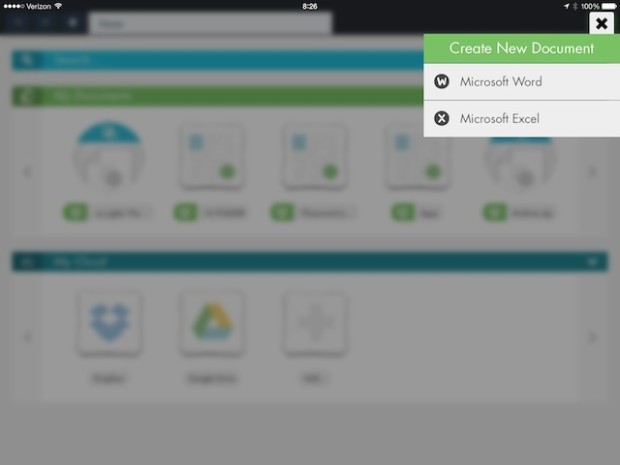 Working with a Word document the edit screen gives you a reasonably blank slate with menu bars with common formatting options at the bottom of the screen. There is a button to allow you to track changes in your document as well. I say reasonably because if you’re using the iOS virtual keyboard that does take up a large portion of the screen. 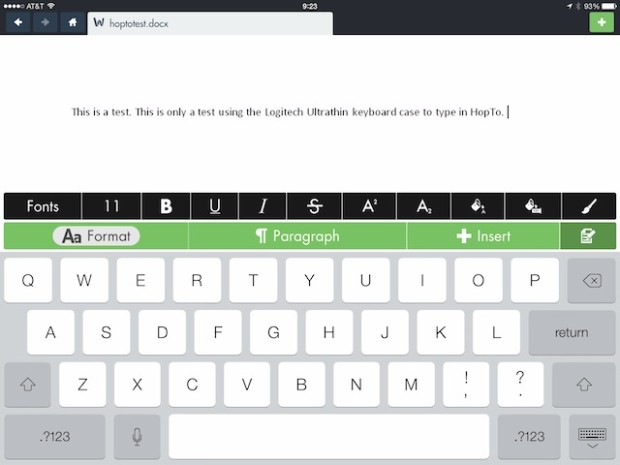 Working in Excel, you’re working on a cell by cell basis when it comes to editing or adding information. If you’re editing an Excel spreadsheet and select a cell, you’re given a context sensitive edit screen that responds to the data already in the cell. Numbers bring up a numeric keypad for example. 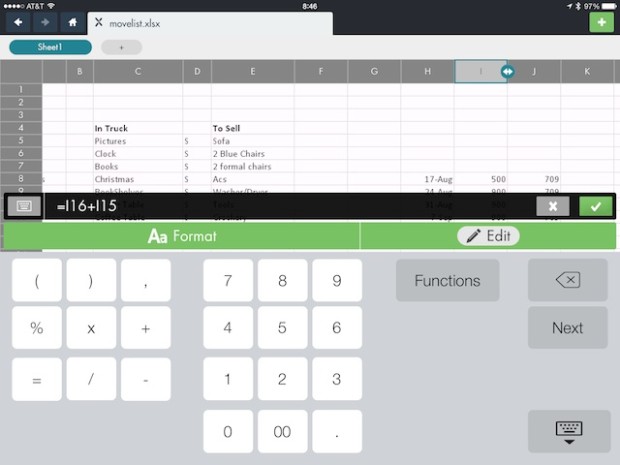 One of the big differences HopTo touts over some iOS Office compatibility solutions is that it doesn’t rely on a virtual solution to display Office within.  Theoretically this should prevent some of the lag that weighted down those solutions, but at times the HopTo editor lags for me as well, especially when using a Bluetooth keyboard.

I’ve tested HopTo with several Bluetooth keyboards and they work well enough, although keyboard shortcuts for formatting do not. I don’t notice the lag as much with the iOS virtual keyboard because at least in my usage I’m a slower typist when typing on glass.

HopTo has a few other drawbacks. You’ll need to be connected to the Cloud to use it. There’s no local storage or offline storage of documents. If you are out of range of WiFi or don’t have a cellular connection you’re out of luck. While the editing functions make sense once you dabble a bit, you’ll need to get used to the metaphors used by HopTo if you need to really crunch documents, especially in Excel.

Is HopTo the next great Office replacement on the iPad? That depends on what you want to do. If you’re just editing or creating a few documents here and there it can certainly fill that bill. If you do a lot of heavy work in Word or Excel in my view it isn’t efficient enough yet to handle a heavy load. But given that the App is free I would certainly recommend giving it a try to see if it fits with your work style.