Zynga is mostly known for its plethora of social games that link to Facebook, but that doesn’t mean it’s devoid of more hardcore games. Horn is the latest game published by Zynga, and it’s the furtherest thing from casual an iPhone game can get.

In Horn players take control of a boy named Horn who one day wakes to find his town of Cuthbert destroyed, and all the people and animals turned into golems. Horn sets out on a journey to save his village and the people in it from the curse.

In typical video game fashion, Horn has to complete his task by gathering a collection of items that help him break the curse. To find those items he has a sword, a gauntlet that shoots arrows and doubles as a hookshot, and his wits. 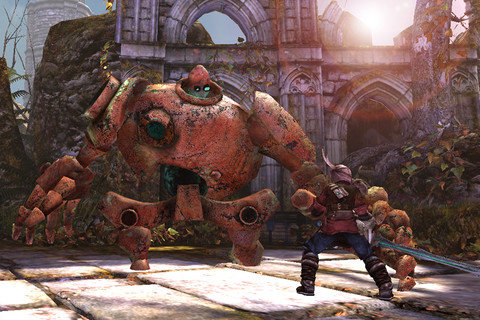 Horn uses those items to complete a series of short missions. Each mission takes only a few minutes, but there are checkpoints so gamers with limited time don’t lose all this progress if they have to leave in the middle of one. The missions themselves aren’t very difficult for anyone that’s played a Zelda game before. They almost feel like they’re made to seem simple so new players won’t find them too difficult.

To make the dungeons interesting, Horn must occasionally fight enemies in an Infinity Blade-like combat system. The battles are more complex as Horn has to find the enemies’ weak points for maximum damage, and he can actually move around the enemies. The result is a combat system that’s more fun than Infinity Blade most of the time, though the lack of a parrying ability is frustrating.

Outside of combat movement is a bit strange at first. Instead of the expected virtual sticks for movement, the game uses a tap-to-move mechanic. It’s not unlike PC games like Diablo III, but the perspective makes it feel strange. The movement really bothered me as I began playing, but after a few minutes I started to get used to it. Horn will still occasionally gets stuck on scenery when I move him, but it’s not enough to make the game any less fun.

Outside of missions Horn can use items he’s collected to upgrade his weapon, accessories, and armor. Horn needs blueprints for items before he can make them, but that’s what make exploring in the missions fun. Of course, as this is a Zynga game, players can choose to just purchase items with real money if they don’t want to search for materials they need for items.

Finally, the soundtrack of the game is amazing. The music is done by Austin Wintory who also created the soundtrack for the amazing Journey on PlayStation 3. The music adds a lot to the atmosphere of the game, and it even works well without the game. It’s just a great soundtrack that adds to an already good game.

For $6.99 Horn is a bit expensive, but it’s definitely well worth the price for anyone looking for a fun iOS game. I encountered a few problems playing the game on my iPad, but it played very well on my iPhone 4S. With the touch-to-move controls, I actually prefer it on the iPhone, but some may prefer the iPad’s larger screen instead. Any iOS gamer with a recent device should find something to love in this game.