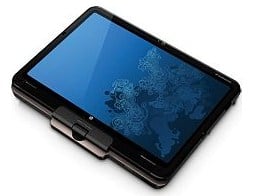 The tablet race is just getting started, yet people are already talking about making them better. Folks at both Business Insider and Technologizer are challenging LG’s claim that they’ll build a tablet better than the iPad. Engadget is asking HP Touchsmart tm2 owners how they’d change their Tablet PCs. It’s like a forum topic on the best/ideal/perfect tablet spread to the blogosphere.

First, LG made a point to specify their tablet will focus on content creation, “such as writing documents, editing video and creating programs.” Dan Frommer at Business Insider asks “how in the world” they can make their tablet better than the iPad. Jared Newman of Technologizer points out the tablet form factor, not the software, is the key limiting factor here and rounds up other arguments to support his point.

As most of us know, tablets that can create documents, edit video, and create programs have been around for years. (In fact, I’m creating this document on one right now.) However, they haven’t exactly set the world on fire, have they? Making a tablet “better” than the iPad is more than possible. Making one that can match the iPad in the market is a different matter.

Over at Engadget, they’re asking readers how they’d improve their HP Touchsmart tm2 Tablet PCs. Their specific questions include asking if the CPU is up to speed and whether they’d want resistive touch instead of capacitive. The irony in this line of questioning is that the tm2 is itself a major turnaround in these areas, switching from the hot-running AMD processors in its predecessors and advancing to pen + capacitive multi-touch with Wacom dual-digitizers. Most of the comments from folks who actually have the tm2 (who seem to be in the minority of commenters) ignore those points and focus on the display and other features.

Despite protests to the contrary, I agree with LG that there is much room for improvement over the iPad and also that there’s a lot more to be done with Tablet PCs. And it’s not just a matter of faster processors, better battery life, higher resolution, and the other usual suspects from the “dream” tablet list. Hardware improvements are important, but look at the major interface improvements that Bill Gates repeatedly pushes. Voice command, handwriting recognition, touch and pen control, the hardware to make these happen is already here; what we’re waiting on is the software to make them great. That’s where I see the grand improvements to the tablet experience happening. Where do you see them happening?