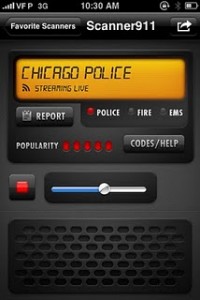 29 year-old Matthew Hale was arrested as the getaway driver in a case where his accomplice was robbing the pharmacy. Hale had initially fled the scene after learning what was going on inside the pharmacy–the stint was infiltrated.

How did he know? Simple and inexpensive police radio apps on his smartphone gave away what was happening inside as Hale was tuning in on his Droid smartphone on Verizon, which operates on Google’s Android operating system, outside in his car.

Police later caught up with him and charged him on a felony count of attempted armed robbery.

Prosecutors initially looked to book him also on a misdemeanor count of unlawful use of a police radio, but later decided to just stick with the tougher felony charges.

In many states, there are laws against using a police radio. Owning one, however is legal, but using a mobile radio, like one on a smartphone that’s enabled through an app and a broadband Internet connection, is not legal. Laws differ in each state, and is often confusing, but if you’re thinking of using a police radio as a a tool for a crime, think again.

However, since Hale committed the crime in Indiana, it’s tougher laws make owning the radio itself a violation of law.

Are you safe if you don’t live in any of the 12 mentioned states? There is also an unwritten doctrine of  obstruction of justice that could apply, so even if your state doesn’t have a law about owning a police radio, you may still be at risk for violating the law if you have an inexpensive app that tunes into police signals on your phone.

As the laws are still trying to catch up with technology, owning an harmless app that could sometimes be intriguing–depending on what’s being picked up on the police scanner–can result in a criminal charge.