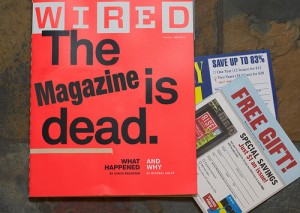 When Apple announced in app purchases back in February, the company announced a set of harsh rules for in app subscriptions, specifically regarding the price that publishers could charge for their products and services. Under this policy, the magazine deals that we had come to enjoy were as good as dead because publishers couldn’t afford to offer a 50% discount and then hand over 30% of the price to Apple for in App purchases.

Thankfully Apple quietly reversed course at the tail end of WWDC, allowing publishers to set subscriptions prices in a manner they see fit and in the process may have saved print and in app magazine subscription deals.

How did Apple almost take away our $12 subscriptions to WIRED and our $5 a year GQ subscription deals you ask? The evidence is in the pricing on Magazine discount sites, which up until last week had still been offering deeply discounted subscriptions to popular magazines.

Just last week you could purchase a one year subscription to WIRED for $11.99 from sites like discountmags.com, but that price has magically jumped up to the same $19.99 a year pricing that is offered in the WIRED App as an In-App purchase and on the WIRED website. 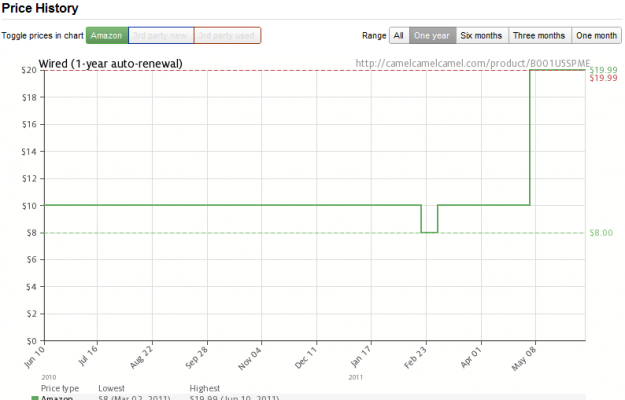 Even Amazon Magazines, which typically offers some of the best deals for magazine subscriptions saw a price jump from $10 a year on May 3rd to $19.99. Given the proximity to the WIRED Magazine iPad app’s release date, it’s not unlikely that this price hike had something to do with Apple’s review of the new Wired 3.0 app.

The price for WIRED is still at the higher price, which is likely tied to the fact that Apple didn’t communicate the new In-App Purchase policy change to publishers ahead of time. GQ is already available for $12 from a number of other locations so we are hopeful that Magazine subscription deals and discounts will come back soon; especially since print subscribers can get access to the digital editions form WIRED, GQ and others.

Now if only the publishers could figure out the goofy pricing of print and digital magazines. You can currently purchase a 1 year subscription to GQ in print and digital for $12, but if you want the digital only version you’ll need to pay $19.99.