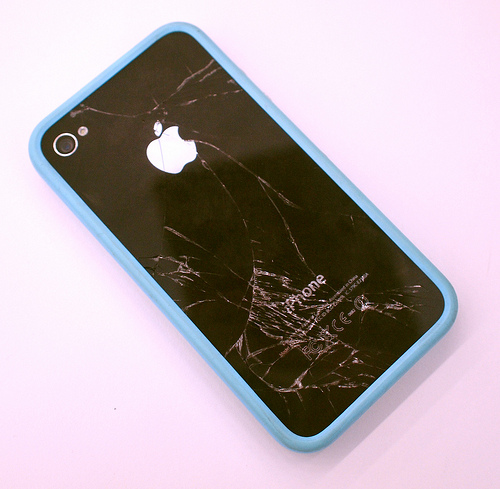 I’ve been handling my iPhone 4 with kid gloves since I bought it in June.  Its shiny glass exterior  might go unscathed for a year or two, but sooner or later  I’m sure it’s going to scratch or break unless I  wrap it up  in a very heavy-duty case. Like most consumer gadgets,  the iPhone 4  just isn’t built to last.   We’re  living in an age of disposable gadgets  and I’m sad to say there isn’t a consumer gadget  I own that I’ll be using in five years.

Nick Bilton of The New York Times wrote an interesting blog post about his shattered iPhone 4 and how gadget designers are designing for short life spans. Anyone  that’s handled an iPhone 4 could probably tell you it won’t survive a moderate drop onto a hard surface.  But of course  the iPhone 4 isn’t the only disposable gadget out there. Most digital cameras  are made of fragile plastic and can’t survive a moderate fall. Affordable notebooks,  the kind that consumers buy it in droves,  are too fragile and wear out  sooner than anyone would like.  These notebooks  simply aren’t built with durability in mind.

One designer  summed it all up by saying:

“If you purchased a Leica camera a hundred years ago it would still work today. It was bulletproof. But electronics today are not built with permanence in mind.”

I hardly expect gadgets to last 100 years, but you have to wonder what’s been sacrificed when gadgets are sold with warranties that are only as long as a product cycle.Of course durability isn’t the only reason why  gadgets are disposable.   A lot of the gadgets we buy are obsolete by the time we break them in.

My first  HDTV, a 40″ Panasonic Viera 720p model, crapped out  after 20 months of  moderate usage.   Fortunately, I bought it from Costco, which graciously refunded the full purchase price of $2,000  when I wheeled it back into the warehouse.   Costco didn’t have a suitable replacement in stock,  so I drove over to Best Buy  and bought a 46″ Sharp Aquos 1080p LCD HDTV, a PS3 ($400 at the time)  and a couple of games and still had a couple of hundred bucks left over.  Fast forward two and a half years and I can buy a similar TV for about $800. Of  of course  I have no interest inviting a similar TV ever again, because LED and 3D HDTVs that refresh at 240MHz are all the rage.

By and large, as consumers, we want shiny and we want new. This isn’t the case however when it comes to business technology buyers. In the world of business computers and gadgets,  manufactures  understand that businesses will only buy products that will last at least as long as it takes to fully depreciate.  This means professional computers, printers, cameras and other gear are designed to last three, five or more years.  They might not be as sexy or shiny as consumer gadgets, but they are built to last.

Take for example ThinkPad notebooks and tablets. When I venture out in Silicon Valley it’s pretty common to spot people using a T40 series ThinkPads. Some are thrifty entrepreneurs, using their ThinkPads from previous corporate gigs, others are professionals who refuse to let go of their beloved notebook, even though IT’s offered them newer models because they just work. I’ve seen several ThinkPads dropped off of desks and they  generally keep on ticking.

Another example is HP’s EliteBook notebooks. The HP EliteBook 2540p that I’m reviewing has a metal chassis and several durability features. It’s not a tank, like a fully rugged notebook, but it does have a spill-resistant keyboard and a special coating so that the letters on the keys don’t wear off.

On the other hand, many some consumer notebooks’ and netbooks’ keyboard letters are just stickers. A small splash of liquid will fry them, or at the very least cause enough damage to void their warranties. Interestingly, MacBook Pros are especially susceptible to liquid damage since they have zero spill protection, are difficult to dismantle and a keyboard pattern that doubles as a vent. Just because a gadget’s expensive doesn’t mean it’s designed with durability in mind.

I like shiny gadgets as much as the next guy, but I sure wish consumer gadget designers put more thought into longevity.

Consumers such as myself are likely part of the reason why gadget makers don’t care about making gadgets last forever. Except for my professional gear, I don’t view a lot of my gadgets as life time partners.

I’ll likely hang onto my HDTV until it breaks, but it may be relegated to the bedroom in favor of a newer model once the 3D dust settles and a clear standard is established. My iPhone 4 will likely be gone by this time next year in favor of Apple’s next iPhone, or an Android phone. I’ll likely buy a new notebook by next summer. My Nikon D700, my primary DSLR, will stick around until Nikon releases an equivalent model that’s capable of shooting video. My camera accessories, including my lenses, are here until I lose or break them. Some of my hard drives are becoming obsolete and of little use to me- what am I going to do with an 80GB portable drive when I have a couple of 1TB portable drives at my disposal?

Do you view your gadgets as disposable or do you think you’ll be able to hang on to them ‘forever’?